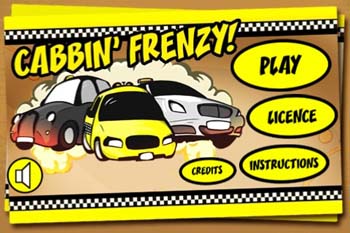 Mobile phone designers from Lancashire’s universities have worked together for the first time to create a game for the iPhone and new iPad mobile device, now available from computer giant Apple's iTunes store.

The game – called Cabbin' Frenzy and developed by students from Lancaster University and UCLAN – involves players trying to dominate the chaotic city streets of New York, Paris or London as the boss of a taxi company. Using “touch and drag”, players direct up to five cabs at once across a 3D map of the city.

The challenge is to choose the best route to collect and deliver passengers, earning the most money while avoiding collisions.

The students’ invention has been backed with £16,000 worth of investment from Lancashire County Council, North West Vision & Media, UCLAN and Preston City Council, while Lancaster University contributed equipment and mentoring.

Industry analysts predict a huge growth in downloads for mobile applications, up from £7bn now to £22bn by 2015.

“The launch of this new product shows the strengths of the two universities and the potential benefits in bringing together design students from UCLAN and developers from Lancaster University to create commercial applications with the support of local businesses," says Lancaster University’s Dr Reuben Edwards, who is based at the Department of Communication Systems at InfoLab21.

The students will earn a bonus if the game sells well, while the profits will be shared between the two software companies involved - GlobiGames Ltd and Shiny Development.

“I believe the stakeholders behind the project were all very impressed by the innovation, work rate and hands-on skills demonstrated by all the students," he added. "We’ve even discussed possible start up opportunities with them because we’d like to create a cluster of games developers here in the North West instead of losing them to London. ”