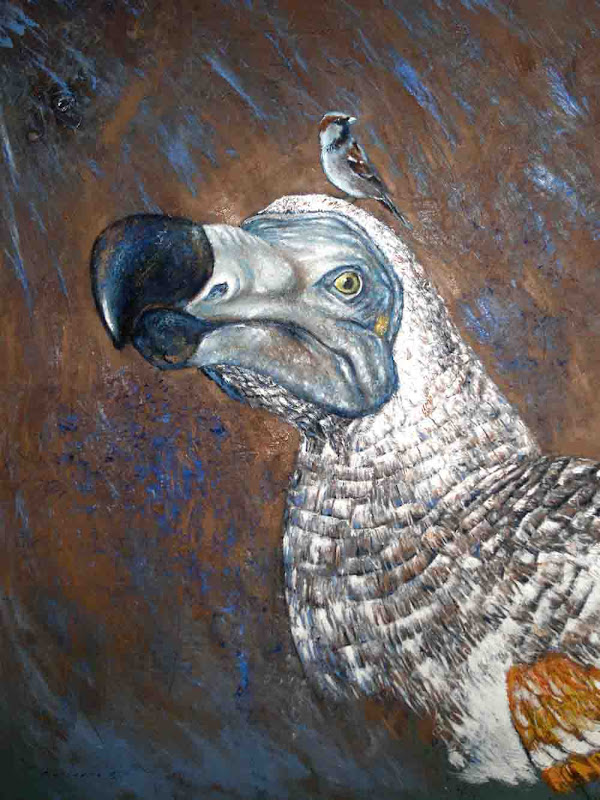 Milnthorpe-based artist Marianne Birkby has been chosen as one of this week's 'Artist of the Day' by the world-renowned Artists for Conservation group.

Based in Vancouver, Canada, the Artists for Conservation Foundation is a non-profit juried association of artists dedicated to celebrating and protecting our natural heritage.

Headline feature on the Artists for Conservation website will be Marianne's oil painting, "Dodo and Sparrow", an oil painting inspired by the award winning reconstruction of the iconic Dodo at Kendal Museum. The painting depicts the Dodo looking to the future while the 'common' sparrow is looking over her shoulder to the past.

Marianne is inspired by the stunning diversity of Mother Earth who actively speaks up for wildlife. She founded Radiation Free Lakeland in 2008 following Cumbria County Council's "expression of interest" in a high level nuclear waste dump and new build.

Following a request from Marianne, in January, Marta Adams - the Chief Deputy Attorney General at the Nevada Attorney General’s Office - spoke on BBC Radio Cumbria urging Cumbria County Council not to rely on information from Government and the nuclear industry but to take independent advice on the implications of a nuclear dump in the Lake District.

A vigorous 20 year campaign by Nevada state authorities has stopped the proposed nuclear waste dump at Yucca Mountain. Marianne said “this contrasts starkly with our Cumbrian Council Leaders who have willingly offered the Lake District up as a nuclear sacrifice zone despite geological ‘disposal’ being the worst possible option for looking after nuclear waste”

Marianne's artworks use various media to make marks from the wild spontaneity of charcoal, to the almost obsessive detail of watercolour.

The Artists for Conservation Foundation is a non-profit, international organization dedicated to the celebration and preservation of the natural world. The Foundation represents the world's leading collective of artists focused on nature and wildlife, with a membership spanning five continents and twenty-seven countries, seeking to support wildlife and habitat conservation, biodiversity, sustainability and environmental education through art that celebrates our natural heritage.

• View Marianne's work on the Artists for Conservation page