CCTV to be cut in Lancaster and Morecambe? 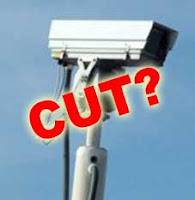 Lancaster and Morecambe may lose some of its CCTV coverage as well as its Police Community Support Officers as part of new savings the Council will need to make as government funding cuts bite, the City's Chief Executive has told virtual-lancaster.

Respoding to our recent stories about Lancashire Constabulary's proposal to sack all its Police Community Support Officers and the local Green Party suggestion that funds could be found to keep some from the Council's CCTV budget, Mark Cullinan, Lancaster City Council’s chief executive, told virtual-lancaster that: “Following the [Government's] Comprehensive Spending Review we now know that the city council is facing unprecedented expenditure reductions of approximately 30 per cent over the next four years.

“It is therefore too early to say what the council’s priorities will be as it looks to make savings of this nature and all options remain open.

“However, CCTV is a discretionary service and inevitably it will therefore be one of the first areas that the council looks at to make savings.”

Responding to concerns over potential cuts to Council funding, Council leader Stuart Langhorn warned last week of  the "enormous challenges" facing the public sector, telling the Lancaster Guardian that "local authorities are coming under increasing pressure to reduce services and focus on the services that people most need.

“In the same way as we did last year, the council has launched a budget consultation and suggestion scheme for people to get involved and have their say.”

• The city council’s budget questionnaire is available online at www.lancaster.gov.uk/consultation. Hard copies were distributed in October via Your District Council Matters.
Posted by John Freeman at 11:31