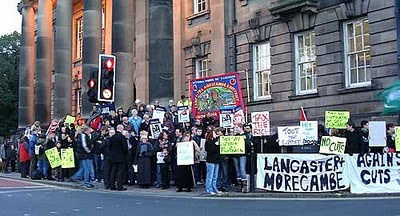 Local councils are expected to have their funding cut by 28 per cent over the next four years, in addition to previous cuts, which threatens a broad range of local services, resources and jobs (and, we suggest, undoubtedly spells the end for Salt Ayre Leisure Centre).

The Universities face similar grant reductions and the axing of the Education Maintenance Grant for the poorest 16-18 year old students means the closure of pathways to higher education for many, regardless of ability.

Against a continuous background noise of supportive hooting from passing traffic, speakers from local Trades Unions and political groups argued from the Town Hall steps that the financial crisis was not caused by profligacy in the public sector but by irresponsible and amoral practices which still persist in the private finance sector, and the subsequent £1.3 trillion bail-out.

In addition poorly negotiated Private Finance Initiative (PFI) deals imposed on the public sector placed an intolerable burden on the state despite their poor performance compared to public sector services. PFI, they argued, served merely as a conduit to channel public money away from taxpayers into private pockets.

They argued that the deficit had given the Conservative government an excuse to "do what they always wanted to do": demolish and privatise public services while shifting wealth and resources to the super-rich.

Cuts are expected to affect the poorest 10% of the population the most, with them estimated as paying up to 5 per cent more tax on their income than the richest 10 per cent, in addition to loss of a wide range of welfare benefits.

Further action is planned locally as the City Council determines over the next few weeks how local cuts will implemented and discussions are taking place nationally regarding the possibility of a General Strike next spring.

• A public meeting entitled ‘Their Debts, Our Cuts’ is also planned at the Gregson at 7.30pm Wednesday 24 November.

• The Lancaster & Morecambe Against the Cuts Facebook campaign site can be visited at www.facebook.com/group.php?gid=133073206741907
Posted by Chris Satori at 12:16

Email ThisBlogThis!Share to TwitterShare to FacebookShare to Pinterest
Labels: Cuts, Demonstrations, Lancaster and Morecambe Against the Cuts, Local Politics