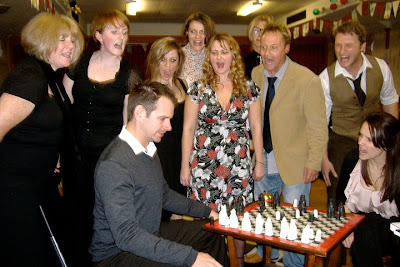 The huge amount of information on the internet about Chess shows that critical reception of this 1980s musical has been mixed. Despite going along with an open mind and in positive mood, this AV Productions' version I'm afraid left me on the negative side of the fence.

I would hazard a guess that this was in part because of the musical itself. The subject matter is interesting - the international chess tournaments of the 1980s, which held real propaganda value for both sides. Politics and musicals do go well together, and defections are common in both.

Yet the love elements of Chess seem unconvincing, shallow, and not at all moving. Just what compels Florence Vassy (manager and lover of American chessmaster Frederick Trumper) to leave Frederick for Anatoly Sergievsky (the Russian chessmaster) in the first place? And then to go back to Frederick? And Anatoly to return to his wife Svetlana who takes him back with barely a murmur? What?

Tim Rice's lyrics come across as sometimes prosaic, sometimes overdone, and sometimes simply cheesy. Benny Anderson and Bjorn Ulvaeus's harmonies occasionally echo those of the earlier Jesus Christ Superstar, but never in the same inspiring way (or perhaps that was the production).

In this production of Chess, there seemed to be an overall problem with sameness. The set itself barely changed, and, ususually, most of the characters were on stage most of the time. Because the stage of the Grand is so small, this often came across as cramped and confusing - given that the dramatis personae included the 'Chess company' as well as the main cast members. The songs lacked variety of pitch, most being sung loudly rather then quietly. The smoke machine was on lightly throughout, to no obvious purpose.

What else? There were minor technical errors, and, more seriously, errors of timing. Because there were no explict scene changes, the locations were announced, often by the Arbiter (Andy Vitolo): innovations like this do sometimes work, but this one jarred. Jeremy Clark reached the high notes in 'Pity the Child', but not in a mellifluous way.

Let me finish with the strengths, because there were strengths. There are some excellent voices in this company, and I would single out Michael Cosgrove (Anatoly) and Mairi-Claire Connor (Florence) here. Cosgrove's rendition of 'Back where I started' (actual title 'The anthem?') was excellent, and, Chess's most famous song, the beautiful 'I know him so well', sung by Mairi-Claire Connor and Gemma Palmer (Svetlana Sergievsky), proved to be worth waiting for.

This seems to be a recurring theme with A V Productions; lack of sets and props. My partner and I went to see Dracula, and I have to say we were seriously disappointed - there were technical problems at the start, and there were no real props - the odd chair came on, but often you saw the same props used over and over again. For background sets, there were hanging white canvas drapes with coloured lights - that was it.

I would agree that there were some fantastic voices being used on the stage, we saw it from the circle and the smoke machine (which I think was technically a fogger) was to enhance the lighting effect which although subtle did work from where we were positioned with a dappling light being cast on the chess board. It is the second production by this company we have seen and we will be back for more.
Theatre supporter.

Brilliant show last night - scenery didn't change but that meant it was easier to focus on the excellent singers. Anyone know what this group are doing next and are they coming to our Lancaster Grand again??