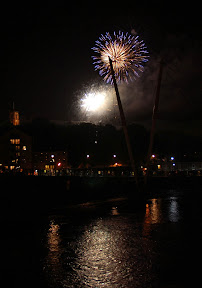 Lancaster City Council is asking for local views on the way Lancaster's Fireworks Spectacular was run this year, after an estimated 10,000 people watched the display from the four official viewing areas at Ryelands Park, Williamson Park, Salt Ayre Sports Centre and Giant Axe.

The fireworks were complemented by a special programme of daytime events which included a Guy Fawkes themed market, lantern making, street entertainment and a live outside broadcast by BBC Radio Lancashire.

Reports about the viewing areas have been mixed, with at least one local raising serious safety concerns online.

The Council took the decision earlier this year to prevent viewing from Castle Hill on health and safety grounds, creating viewing areas across the city instead. But virtual-lancaster has received complaints from locals who watched the display from both Ryelands and Williamson Park which are fiercely critical of the way things were organised.


"We decided to head on down to Ryelands Park as it was their new official viewing area," notes local Dean Clinton in a post on his blog. "When we got there, we were greeted by a large area of mud as well under 18s drinking (with four Police / PCSO officers stood chatting); despite the posters and leaflets saying that alcohol was not permitted.

Dispirited by the amenities there, Dean took his party to Wiliamson Park.

"I wish we hadn’t," he declares. "The Quernmore Road entrance and path was completely unlit. It was like shambling through the dark – we had to use our mobile phones just so that we could see the path without falling over the plants and bushes.
"... When the fireworks started, lots of people appeared from nowhere, climbed onto the railings, stood on the grass and then blocked our view.

"A few moments later, the event stewards walked along, said that everyone needed to move back and carried on walking. No one moved; the event stewards were being ignored.
Looking behind us, people were surging up onto the grass hills which were closed off. Barriers were falling, the red and white tape snapped. At this point, we decided it wasn’t safe anymore and decided to leave the park.

"So…. we missed the fireworks, got covered in mud and ended up going home."
You can read Dean's full account of events here on his blog.
Despite the problems, the Council says thousands enjoyed the display from around the city but has launched an online consultation to find out people’s views to improve the event for future years and find out what spectators thought of the viewing areas. Everyone who completes the short questionnaire will be entered into a free prize draw with £50 in Sainsbury’s vouchers up for grabs.

Coun June Ashworth, Cabinet member with responsibility for tourism, said: “It was a fantastic display and it was great to see so many people enjoying the various locations. As well as local people a large number came from across the north west including Oldham, Preston, Barrow and Blackburn.

“We really want to know what people thought of the new arrangements and we’ll take their views into account when planning the event in future years.”

Inspector Sheralee Duckworth, geographic inspector for Lancaster, said: "The event was well planned, organised and advertised and the stewards at the various venues were well briefed and able to ensure public safety. The introduction and spread of the additional viewing sites resulted in a much more even and safer dispersal of the crowds. All in all it was a successful joint operation."

“Particularly impressive was the effort made by the street market traders to enter into the fireworks spirit with themed displays and extended trading into the early evening.

“All in all, the fireworks theme would appear to be one to build on in successive years."

Steve Spencer, manager of Lancaster’s Sainsbury’s store, added: “The success of the Fireworks Spectacular can only be measured by your feedback. By completing the online questionnaire you’ll be helping to make next year’s event even better.”

• To take part in the short consultation and be in with the chance of winning £50 in Sainsbury’s vouchers visit www.lancaster.gov.uk/fireworks.
Posted by John Freeman at 10:53