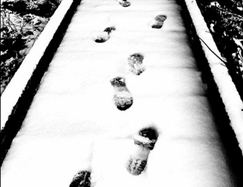 Having just got back from seeing Hypothermia, a production by 'A Full Body and the Voice' written and directed by Vanessa Brooks, I can honestly say that it's one of the best things I've ever seen at The Dukes (and I've been in Lancaster a long, long time).

It is set in a German Hospital for Hereditary and Incurable Diseases somewhere in the frozen North in 1940 (for which read eugenics, beautiful blond pale-eyed boys, super-human bodies, and women who can produce as many children as possible). But it is about whether one person can really be valued above another, and what those of us who have the good luck to have characteristics which are socially valued do when others of us, who do not, are seen as not only disposable but a drain on 'our' resources. The frozen landscape (along with the consumption of large amounts of alcohol) acts as a metaphor for the numbing of feeling and the implications of that for action and decision.

So, the play is interesting, important, well-crafted, with lean, sparse dialogue. The plotline is also simple: what will happen to these people? But the production is as chilling as the setting - and, at the same time, stunning. Magnificent. A privilege to have watched. The five actors are all superb: Oskar Weltz, the only patient we see (Ben Langford), used as a general factotum; Dr. Erich (Daniel Hoffmann Gill), who 'runs' the hospital; Lisa (Faye Billing), secretary and de facto nurse; Dr. Katscher (Johnny Vivash), the Nazi who oversees and controls the hospital, and which patients are 'transferred' to another (as a result of being assigned a 'plus' or a 'minus'); and Frau Poppendick (Margaret Fraser), whose 15-year-old son son died at the hospital of a burst appendix which Dr. Erich had supposedly removed.

The dialogue between the characters is fast-paced and always tense. There are silences and much eye-contact between pairs of characters; Oskar not only watches and listens intently but mimics the actions of those who run his life, making sense of them (or not). At the end he turns the tables by making an autonomous, selfless and unpredictable choice.

Set partly in the hospital office, partly outside on the ice (or under it), two tense days unfold with an edge of surreality, large chunks of physical theatre, Lawrence Kaye's extraordinarily atmospheric music, and singing and dancing. The set includes two desks structured like metal cots. There is much shouting, throwing of objects, and knocking over of furniture. The stage is brightly lit for most of the time. All this makes for uncomfortable watching. But this is a production of the highest calibre which really should not be missed. It has one more night to run. Go.


Jane Sunderland
• Hypothermia was performed at The Dukes, Lancaster on Saturday 6th November.

• Lawrence Kaye’s blog about Hypothermia
Posted by Jane Sunderland at 22:00