Alternative Christmas Party at the Storey 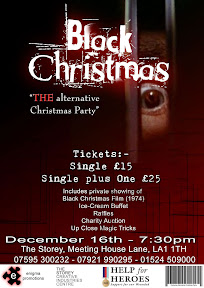 Celebrating the recent re-issue of the original ‘stalk and slash’ movie and because adults deserve a party at Christmas time, Enigma Promotions are presenting Black Christmas, an exclusive party to be held at The Storey in Lancaster on Thursday 16th December.

The party will include a private showing of the Special Edition of Black Christmas, a 1974 Canadian slasher film directed by Bob Clark largely based on a series of murders that took place in Quebec, Canada around Christmas time. It follows a group of college students who must face a deranged serial killer lurking in their sorority house and stars Olivia Hussey, Keir Dullea (best known for 2001: A Space Odyssey), Superman actress Margot Kidder, Marian Waldman, and John Saxon.

The party will also include close-up magic tricks, raffles, an ice-cream Buffet and charity auction.

Local artists have created works inspired by the film and these will be auctioned to raise money and awareness for the Help for The Heroes Charity.

"This Party will appeal to anyone who enjoys great atmosphere and the darker side of Christmas," say organisers.