The Bear Around Your Neck: a chat with singer songwriter Nathanial Scott 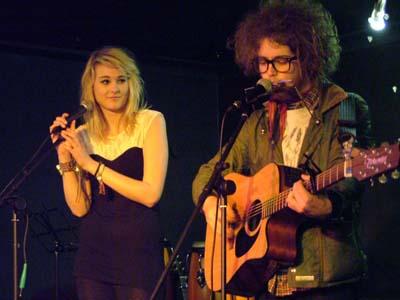 Nathanial “Nat” Scott was 19 when he recorded At Lake Bury Me (released by local label Barnbox last year) with Barnbox’s Tom Diffenthal and Kriss Foster. Then dividing his performing life between Preston and Lancaster, The Bear Around Your Neck saw Nat and singer Megan Laura Whyte sharing his songs over acoustic guitar and Dylan-rack harmonica.

Citing inspiration from the likes of the late, critically acclaimed singer/songwriter Elliott Smith, Nat’s songs set their characters up against seemingly insurmountable forces (ghosts, time, gravity), inviting the listener into world of nocturnal bike rides, ghost lovers and spurred romance. Both congruent and precise, the EP sounds assured and yet vulnerable - like it could ‘break any minute’.

A year on from its release and by now relocated to Manchester, Tom Bramhall spoke to Nat about the record and some of his experiences playing music in and around the area. We touched on his relationship with the visual arts - Nat’s own contribution to the Barnbox design having added a charismatic dimension to both the label’s and his own output - in addition to some of his experiences living in the city.

Tom Bramhall: Nat, you've described your songs as sounding like 'brittle bones'. At Lake Bury Me sounds vulnerable and assured at the same time. I'm wondering how conscious you've had to be of these things?

Nat: I wasn't really, I don't think. I just wanted the songs to be left as they were. My friend once said when he was watching me play, it looked like it could all go wrong, or 'break', any minute. 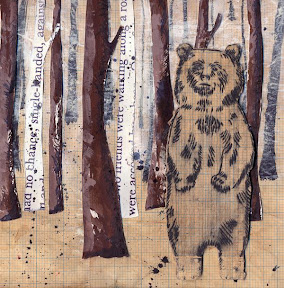 Tom Bramhall: When did you notice yourself start writing songs?

Tom Bramhall: When did you decide to share them with other people?

Nat: Around the time we recorded the songs.

Tom Bramhall: You've got declared influences - fancy talking about them?

Nat: Yeah -- I like Elliott Smith, Bob Dylan... All that. A lot of the music I listen to is 'lyrically focused.' I just enjoy it more than listening to music that isn't. I don't know why.

Tom Bramhall: Do you read comics?

Nat: I often used to, but not so much anymore, but I'm still really interested in the drawing style. 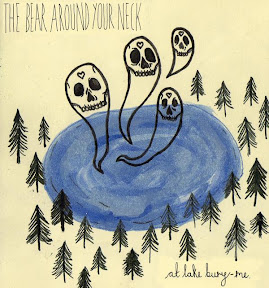 Tom Bramhall: Who painted the cover for the Barnbox CD?

Nat: Me. I like to do the covers myself.

Tom Bramhall: Are you still in touch with Barnbox?

Nat: Yeah, we're half way through the next E.P at the moment. Moving away has meant we haven't talked much, but that's natural I think.

Tom Bramhall: How did you come across one another?

Nat: I played a gig for one of their nights, and afterwards Tom Diffenthal asked if I wanted to record with them.

Tom Bramhall: So, any observations from a Wyre & Fylde man on living away in Manchester?


Nat: So far, it's been fast. I feel like I've been here a week. Size is a huge difference, as Lancaster is quite a small city. I was pretty apprehensive about it at first, and still am, I suppose.

Tom Bramhall: Are you playing at all?

Nat: Yes. There are a lot more places to play, so I've been playing around as many places as I can.

Tom Bramhall: What are the best and worst things so far about living in the City?

Nat: I think the best thing is the fact there are more venues, more musicians, and some friends moved here too. So I haven't been alone all the time.

Tom Bramhall: Are you working/studying out there?

Nat: I'm not sure. I've just pretty much kept myself to myself, and got on with what I enjoy.

Tom Bramhall: As someone who's performed live music in Lancaster - what would you say - if anything, distinguishes it from other towns and cities?

Nat: Lancaster has a large group of performers, in a smaller city, that all know each other, or know of each other. It's really great. Much more tighter knit than other surrounding towns or cities.

• Nathanial Scott writes and plays for The Bear Around Your Neck. ‘At Lake Bury Me’ was released by Barnbox Records last year - www.barnbox.co.uk


• Tom Bramhall writes for po)))nies. A selection of recordings can be heard at www.myspace.com/poniesetc
Posted by John Freeman at 09:51