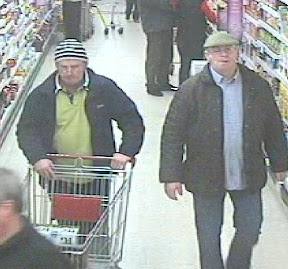 Police have released CCTV images of two men they wish to speak to in connection with a theft from a supermarket in Lancaster last month.

At approximately 5.20pm on the 18th November, two men entered the Booths store on Hala Road in Lancaster and walked around the store, filling a shopping trolley full of groceries and alcohol.

They then appeared to attempt to leave the store without paying for the items, but they were disturbed by a customer and abandoned the trolley in the outside foyer, making off in haste from the store. The items, totalling over £300, were recovered.

“I am appealing for witnesses to this to come forward to help police establish the circumstances around this theft," says PC Simon Harrison, who is investigating the theft. "Despite the men leaving the items behind, it would appear at this stage that were going to attempt to leave with the items without paying for them.

“I would appeal for the men themselves, or anyone who recognises them to come forward and contact police so that we can discuss the incident further to establish exactly what happened.”

The first man is described as being in his mid 50’s, of heavy build with a moustache.  He was wearing a black and white striped hat, a dark blue jacket, a yellow or green top and dark trousers.

The second man is described as also in his mid 50’s, of heavy build and clean shaven with glasses. He was wearing a light green cap with a dark green jacket over a light blue shirt with jeans.