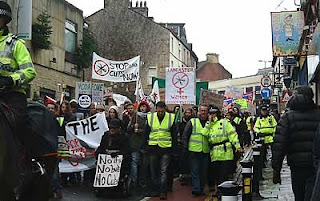 They gathered yesterday, upward of a thousand of them, with their banners and placards and anti-cuts slogans, in a cold car park off a bottleneck in the Lancaster one-way system. Dozens of police, still caring passionately, in spite of their own employment and pensions troubles, turned up to cheer them on and keep them safe, bringing many horses to charm and entertain the children.

And one man among them had come alone, to represent thousands. When he addressed the waiting crowds hardly anyone could see him and they had to strain to hear the bloke in the electric wheelchair telling them about cuts in disability benefits. But they had to listen because, he explained, disabled people had so little opportunity to be heard, struggling as they were with illness and incapacity. They faced cuts in housing benefits, mobility benefits and in services that few would be able to manage without, but they needed help to resist and fight for their lives. He knew they weren't the only group facing problems - he noted the presence of the Women Against the Cuts Group, but he was just asking people to care. "We do", the women promised him. "We will."

He got a warm cheer from the assembly, and then, with great dignity and flanked by banners, he wheeled toward the street. The crowd began chanting its slogans and marched out into the city streets, led by a smart honour guard of matching mounted police four abreast in their bright canary-yellow tabards.

They marched through the bright pre-christmas shopping centre to the cheering support of the masses, or at least their bemused momentary distraction from the business of completing task lists. The chant about Nick Clegg didn't fail to get a laugh, though it's not printable. They paused to boo at TopShop and BHS, owned by massive, massive tax-dodger Philip Green, a real scrounger on the state bending the cohabitation rules, who seems to have escaped the wrath of Daily Mail. If the taxes of the superrich were collected they would more than cover the savings expected from the these cuts to the poor and vulnerable, they shouted. And they sang to a conga beat "We won't shop at TopShop, we won't shop at TopShop, dah dah dah, dee-dah dah dah!" It didn't stop any shoppers but Rome wasn't built in a day.

It was a slow climb back up the A6 to Dalton Square. The battery on the wheelchair powered a stately progress. The crowd settled behind the pace of the lone wheelchair, and together arrived in the square. At which point the man driving it had to nip off in it round the side to the flat entrance while everyone else piled up the steps.

The speeches were brief and to the point. About banking charge rip-offs, tax dodging, and how the cuts would damage every layer of our wide community but benefit the obscenely wealthy. They came from unionists, feminists, students and people who were desperate and a warning. They had the same message: 'If you don't resist you will lose what you can't hold onto. Our only recourse is to speak up and do so immediately, repeatedly and more and more loudly until we are heard. Attacking the poor to save the fortunes of the super rich is not our only choice. People are worried about protecting their savings and pensions and they think that the cuts will save them. But it would be far cheaper to guarantee the savings of the many than to guarantee the astronomical debts of a handful of billionaires.'

'The Lib Dems have to vote in parliament on increased tuition fees on Thursday 9 December. To keep the coalition government stable they have to vote for policy that directly opposes their pre-election core promise of preserving access to education for all. That would spell the end of the Lib Dem party values and in the eyes of the public represents a moral and political crossroads for every Lib Dem MP. It's a test.'

More anti cuts protests are scheduled in Lancaster in the coming week as pressure for change is maintained. Check out the Lancaster & Morecambe Against the Cuts Website for up to the minute information.

This is not an impartial report, but it is a balance to the News International global media corps output. In addition, as only City Councillors from the Green Party turned up, it is a report on the views of a significant constituency. And we all made a promise to an old bloke in a wheelchair.

Comments are welcome.
Posted by Chris Satori at 10:56

Email ThisBlogThis!Share to TwitterShare to FacebookShare to Pinterest
Labels: anti-cuts demo, Lancaster and Morecambe Against the Cuts, lancaster feminists, protest, Women Against the Cuts