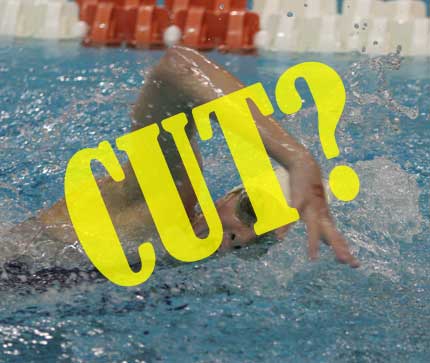 The City Council's decision to hand back three community pools to Lancashire County Council has been called-in for scrutiny.

The county council owns pools next to schools in Hornby, Carnforth and Heysham, but they are currently managed by Lancaster City Council and subsidised to the tune of £133,500. The pools are mainly used to provide swimming for schools and swimming clubs.

Last week, the city council’s Cabinet agreed to give the county council 12 months notice to end this partnership, responding to likely cuts in Government funding for the services it runs.

By giving 12 months notice, Cabinet agreed that this would give the county council time to consider the future of their pools, as part of a wider process of identifying areas where money can be saved.

However, the decision has now been called-in for scrutiny: the council’s Overview and Scrutiny Committee will investigate the issue at its meeting on Monday 8th February at Morecambe Town Hall, starting at 6pm.

Members of the committee will have the opportunity to question the decision makers, make recommendations and potentially ask Cabinet to reconsider the decision.

Other options available are to refer the matter to full council who, after debate, can accept Cabinet's decision or refer it back to Cabinet for reconsideration.

Alternatively the committee can decide to take no action, in which case the decision will be implemented.

The potential closure of the pools has met with considerable concern from users. Mark Smith, head coach at the Carnforth Otters swimming club, whose 200 members train at Carnforth and Heysham, says Salt Ayre would be unable to accommodate all the sessions.

Morecambe rape to be featured on tonight’s Crimewatch

Detective Inspector Jo Dent, of Morecambe CID, will make the appeal on the show, which will air on BBC 1 tonight. (Weds). The appeal follows an incident on New Year’s Day, when a woman was raped after meeting her attacker in the town’s Coast venue.

Viewers will be shown footage of the alleged offender, who was in pirate fancy dress. He was wearing a “Tina Turner” style wig, a pirate eye patch, striped trousers and a red jacket with dark coloured shoulders and white stripes across the shoulders and down the sleeves. It is believed he may have had a foreign accent – possibly Eastern European. 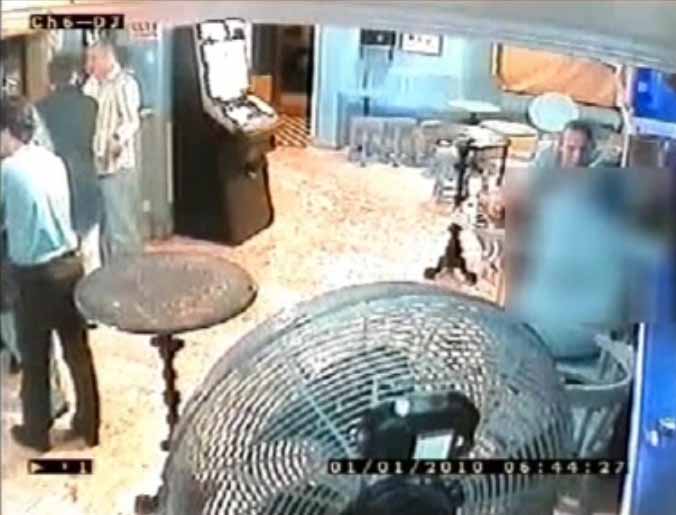 Above: A still from CCTV footage of a suspect being sought in connection with a sex attack in Morecambe on New Year's Day. The suspect is shown above the blurred square on the screen (the blur is concealing the victim).

DI Jo Dent said: “We have had some information from the public, but we are hoping that the Crimewatch appeal will help persuade more people to come forward.

She added: “Incidents like this are rare in Morecambe and I want to reassure residents that we have a dedicated team working on the case, who are committed to solving this crime.”

Thunderbirds Aren't Go at the Platform

Sylvia, now in her 80s, was to have been in conversation with composer and record producer David Courtney to talk about her long-awaited biography My Fab Years and her time working on some of Britain's best-loved children's shows, from the early 'Supermarionation' days of Thunderbirds, for which she provided the voice of superspy Lady Penelope, and live action series Space:1999 and UFO.

The cancellation comes despite what we're told were strong sales for the night at the Platform: her agent has told VL sources that there hadn't been enough interest in the tour, although we're also told that Sylvia is somewhat notorious for not turning up for conventions she is supposed to be at.
Posted by John Freeman at 14:53 No comments:

A woman identified on CCTV after an appeal by local media has been given an £80 fine after buying four-litres of alcohol for young girls – who later ended up drunk by Lancaster canal.

The three 12-year-olds had approached the 36-year-old woman outside a store in Lancaster and asked her to buy them two two-litre bottles of cider in November last year. The girls ended up in a vulnerable position at the side of an unlit section of the Lancaster canal and police were contacted after a parent found them and took them home.

“The woman was incredibly sorry for what she had done and said she had thought that the girls were older than they were," said PC Phil Ladlow, community beat manager for Lancaster’s Bulk ward,"but this is no excuse for such irresponsible behaviour.

“Buying alcohol for those who are under age is not only breaking the law but it is also dangerous, as shown by this incident. Alcohol impairs your senses and these young girls were left in a very vulnerable situation where they were open to harm.

“The message is simple – don’t buy alcohol for kids," PC Ladlow added. "You could get an £80 fine, but the dangerous consequences of your actions could have even more devastating affects for all those involved.”

Posted by John Freeman at 10:54 No comments:

Lancaster is commemorating Holocaust Memorial Day through as series of events co-ordinated by NCBI Lancashire.

Holocaust Memorial Day 2010 marks the 65th anniversary of the liberation of Auschwitz-Birkenau and the Holocaust Memorial Day Trust is challenging everyone across the UK to become part of a Legacy of Hope. HMD 2010 offers an opportunity to listen to the voices from the Holocaust and Nazi persecution, and to make the lessons of hope for a safer, inclusive society where the differences between us are respected a reality today and in the future. Holocaust survivors have played an immense role in bringing our attention to the lessons of the Holocaust.

On 27th January at 8.20pm the Dukes is showing Defiance – an inspiring true story about three Jewish brothers who escape death and go on to lead many Jews to safety.

Finally, on 28th January there's the annual candle lighting commemoration at 6.30 in the Garden of memorial beside the town hall followed at 7.00pm by a celebration of hope co-ordinated by More Music.

Soviet soldiers liberated Auschwitz-Birkenau on 27th January 1945 and found several thousand emaciated survivors and the smouldering remains of the gas chambers and crematoria – the Nazi attempt to destroy evidence of their crimes against humanity. It was the largest Nazi killing camp, murdering approximately 1.1 million men, women and children, and has become a symbol of the horror of industrialised murder, and what can happen when hatred is left unchecked.

Holocaust Memorial Day remembers not just the victims of Nazi persecution and murder, but those killed in subsequent genocides in Cambodia, Rwanda, Bosnia and Darfur.

Police officers have been praised for their swift actions after a dramatic river rescue was launched to save the lives of two men who had earlier been seen in Lancaster city centre in an altercation.

The rescue began after an officer on patrol heard splashing sounds coming from the River Lune, next to Skerton Bridge, in Lancaster on Friday evening.

Two men, aged 18 and 20, could be seen in the water, calling for help but dense fog and the speed of the river made it difficult to keep track of them, and as they passed under the bridge, one disappeared from view.

A lifeline was thrown to one of the men and he was then pulled to safety by officers. The fire service, coast guard and mountain rescued then joined in the search for the second man. A cordon was maintained around the bridge, and another one was set up at Millennium Bridge, with the coast guard using a hover craft to search the water.

The second man was found shortly before 10pm, having got out of the water by himself and both men were taken to Royal Lancaster Infirmary for treatment.

It later became apparent that the men, both from Lancaster, had been involved in an earlier altercation in the city.

Inspector Jim Edmonds, Lancaster Police, said: “This incident involved great team work by all officers involved, with the assistance of the fire service, mountain rescue and the coast guard. Their swift and professional actions helped to avoid a potentially fatal incident.”
Posted by John Freeman at 13:14 No comments:

Some locals have raised in concern at the latest salvo from Lancaster City Council against littering - which included the photograph of an alleged 'butt dropper' in a press release.

The Council issued an appeal for the name of the alleged litterer, spotted dropping a cigarette butt on Market Street in Lancaster ran away before he could be issued with a fine by one of the Council's enforcement officers.

While almost everyone supports the Council's anti-littering agenda, virtual-lancaster was surprised to read a press release in which, in effect, a Green Party councillor was giving tacit support to Lancaster City Council's surveillance tactics. Several VL readers have expressed concerns the publication is a step too far in the campaign, with one even suggesting it might be contrary to Home Office guidelines on covert surveillance.

"Don't get me wrong, I'm not pro-littering," said one, "but while I can see the value of the police issuing CCTV footage in the case of an offence, publishing someone's photo for alleged littering is surely all a bit 1984?"

Another virtual-Lancaster reader argues the photograph is also overstepping the mark. "It's perhaps because they're trying to drive the lesson home, they told us, "but they've got thousands of unpaid parking fine photos (they take one when they issue the ticket) which is, frankly, a bit more serious and very much more costly; and unpaid business rates, and they wouldn't dream of publishing photos of those offenders."

Coun Jon Barry, quoted in the release and arguing people should take responsibility for the cleanliness of the district, is a member of the Green Party, which has policy on stricter controls for video surveillance, but argues this was a photograph, not CCTV.

"It wasn't [footage from] a surveillance CCTV camera - I'd like to get rid of them as I don't believe they work or are effective," he told virtual-lancaster. "This is when somebody dropped litter and then ran away and then they took his photo. I don't have a problem with that.

"Checking litter droppers 24 hours a day re CCTV I agree is rather 1984 (though I would agree to place it in an area that is regularly fly-tipped on).

"My ideal scenario would be for nobody to drop litter and for nobody to be fined," he says in the Council's press release, "but if we have to fine people for dropping litter then it’s a step we’re prepared to take to keep our district clean and litter free."
Posted by John Freeman at 11:43 No comments: