The Lancashire Evening Post is looking for writers who would like to publish their work in their creative writing section in the Saturday edition of the newspaper each week.

The section is dedicated to the works of readers, and is a great opportunity for writers to get their work noticed. It's free of charge, and the LEP are looking to publish pieces of around 1,500 words. Short stories and extracts are most common.

If anyone is interested in this opportunity, please contact Editorial Reseacher Kay Taylor via kay.taylor@lep.co.uk with your work, citing their full name, age, where you live, occupation, marital status. You should also include a head and shoulders photograph.

"I do hope that people will take advantage of this," says Kay, "as the new-look Saturday paper is really taking off and is really focused on local communities and readers."
Posted by John Freeman at 11:28 No comments:

This workshop, taking place on Tuesday 9th February 10am to 1pm, covers the fundamentals of effective marketing, from market research and competitor analysis to branding and positioning.

The free session, organised as part of the Northwest Development Agency's Intensive Start-Up Support programme, will provide a clear overview of the marketing essentials for any fledgling business, particularly those that have little or no budget. It's designed to ensure that business owners understand the challenges of a competitive market place and how best to use limited resources.

Enterprise4All is a leading business support agency with a team of professional advisers based at the Storey Institute in the centre of Lancaster. The not-for-profit organisation is delivering the Northwest Development Agency's ISUS programme in Lancaster, Morecambe, Carnforth, Heysham and the surrounding rural areas and is funded by the NWDA, the European Regional Development Fund, Lancaster City Council and Lancashire County Council.

• Places are limited and must be booked in advance. Anyone wishing to attend the event should contact Carolyn Hayes on 01524 509099 or email Carolyn@enterprise4all.co.uk.
Posted by John Freeman at 11:19 No comments:

Police are appealing for information after a local landlady was left with a broken wrist and her son sustained a broken nose during the Manchester football derby at the weekend.

The attack came after staff at the George Hotel, in Lancaster Road, Torrisholme, challenged two young men who did not have any ID during the televised game.

The men left the pub, returned 30 minutes later and then refused to leave and when the landlady and son tried to usher the pair out of the pub, one male punched the landlady in the face, knocking her to the floor.

Her 17-year-old son came to her aid and was punched in the face a number of times by the two males, breaking his nose.

Both offenders then fled the pub into the car park and got into a vehicle which was then driven at the landlady and knocked her to the ground, causing a broken wrist.

The offenders were described as two white males, aged between 15 – 18. One was of stocky build, was around 5ft 3 – 9” tall, had light brown hair and spoke with a slight Irish accent. The other was about 5ft 2 – 5” tall, was slim, with dark hair and was wearing a baseball cap.

“This was a vicious and unnecessary assault on a landlady and her son, who was trying to protect his mother," said DC Tim Dodgson of Morecambe CID.

“The landlady is very lucky not to have more serious injuries, considering the fact she was actually struck by the vehicle.

“If anyone has any information about this incident I would urge them to come forward.” 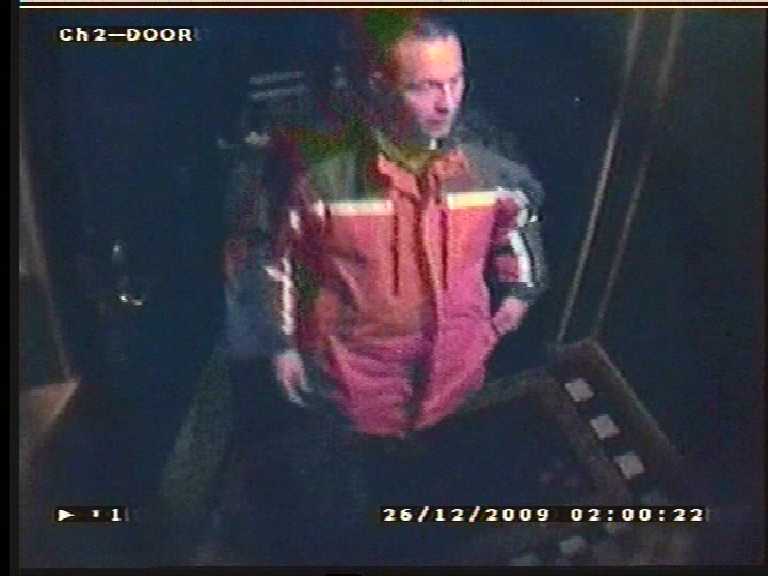 Footage from a Morecambe bar’s CCTV cameras on Boxing Day could be the key to catching a man suspected of carrying out a New Year’s Day sex attack.

Police discovered the CCTV clip while investigating the rape of a woman who met her attacker in the town’s Coast bar as the New Year festivities were winding down.

The man, who was wearing pirate fancy dress, raped the woman after walking her home. 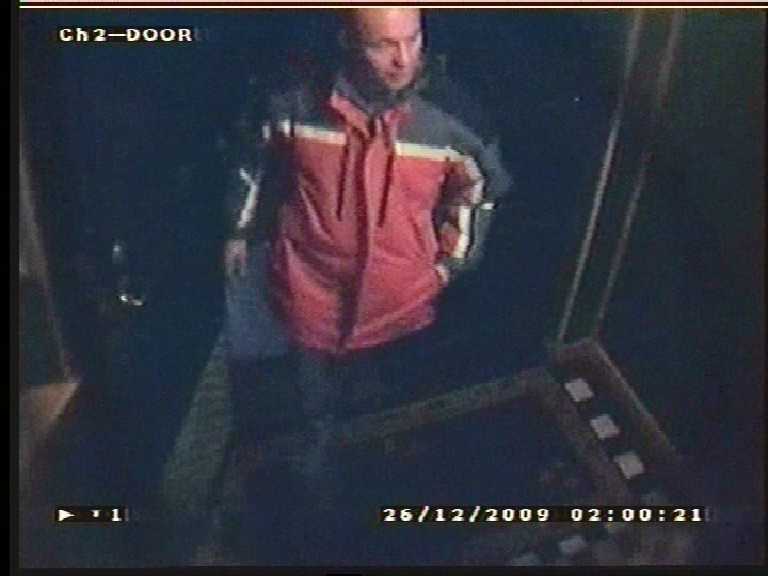 The new image - captured in the same bar in the early hours of Boxing Day 2009 - was revealed on a recent edition of the BBC’s Crimewatch programme. Police now hope that the clearer picture will lead to more calls from the public.

“We've been following up about a dozen lines of inquiry as a result of our appeal on Crimewatch," revealed Detective Inspector Jo Dent from Morecambe CID, "but we still need more information.

“The footage from Coast on Boxing Day shows a man who bears a striking resemblance to our suspect for the New Year’s Day attack. We would urgently like to speak to the man shown in the footage in order to eliminate him from our inquiries.” 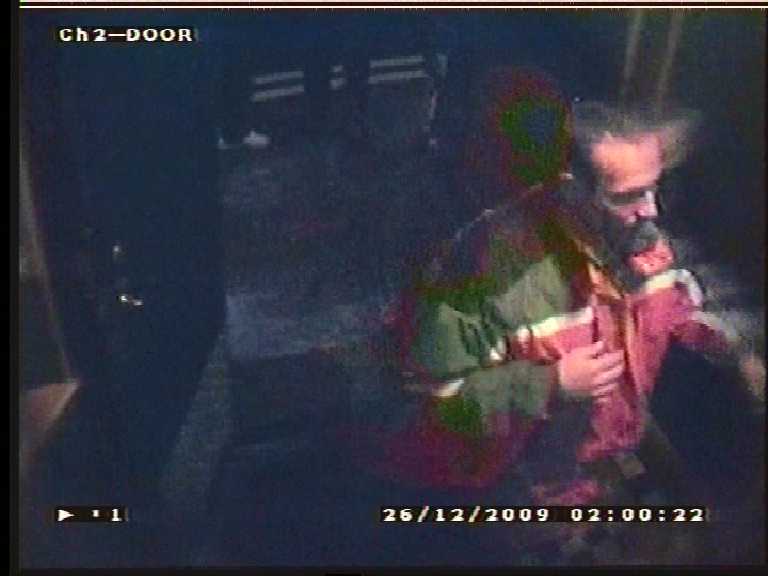 Officers will also be visiting guest houses in the Morecambe area to try and establish whether the suspect was a visitor to the town over the festive period, rather than a resident.

“We are keeping our minds open about where this man is from and where he was living at the time of the attack," added DI Dent. "If someone remembers him staying with them, being a customer in their shop or bar – or even seeing him stood at a bus stop - we want to hear from them."

• Click on the smaller images for larger size of the footage.

Posted by John Freeman at 09:05 No comments: 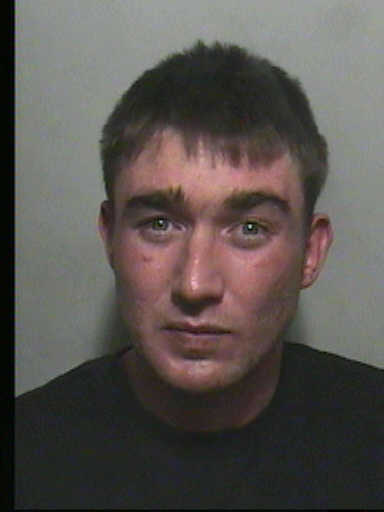 Posted by John Freeman at 14:59 No comments:

Students and youngsters are being warned about the dangers of ‘Bubble’, a relatively new drug that mixes fertiliser and amphetamines, after seven people were arrested at a Lancaster nightclub at the weekend.

The students were arrested on suspicion of possessing drugs and told officers they believed the substance to be ‘Bubble,’ the street name for Mephedrone. The substance has now been sent away for forensic analysis.

While it's currently not illegal to possess Mephedrone - also known as 'meow meow' - under the Misuse of Drugs Act, it is illegal to sell it for human consumption, which is why it is often marketed as plant food.

Mephedrone usually takes the form of a white powder or crystals and can also be in tablet form or capsules containing the powder and has is known for creating feelings of euphoria, alertness, talkativeness and feelings of empathy in the user, but its known side effects include anxiety and paranoid states in some, convulsions, breathing problems, nose bleeds - and, in some cases, even death.

The drug is illegal in Sweden, Norway, Denmark, Finland and Israel and psychiatrists are lobbying for it to be banned in the UK.

Last November, BBC News reported that police in Teesdale issued a warning about the drug after several youths fell ill after taking the drug. In December, the Daily Mail reported how 14-year-old Gabrielle Price had died after taking a suspected drug cocktail including Mephedrone at a house party in Brighton.

Detective Chief Inspector Neil Gregson, Lancaster Police, said: “As is the case with all drugs which appear in powder form, Mephedrone lends itself to being ‘cut’ with other drugs.

“This means you can never know exactly what you are putting into your body.

“Mephedrone can cause very bad reactions when mixed with alcohol - people have died from taking this substance - and there's the risk of paranoia and possible mental health problems in the long term.

“There is also the danger that young people may experiment with other forms of plant food in the belief that these will also have a euphoric effect.”

He added: “Aside from the health risks, if you are found to be carrying drugs you may be arrested and will be under investigation until it is determined exactly what that substance is. Mephedrone is currently not illegal, but that looks set to change, and a criminal record could impact heavily on your future.”

Posted by John Freeman at 14:55 No comments:

Could your street benefit from a spring clean? If so, Lancaster City Council wants to hear from you.

Under the council’s Street Pride scheme, special hit squads move in to streets across the district to give them a thorough clean. Services provided include street cleaning, gully emptying, minor highway repairs, weeding and tree pruning.

Launched in 2008, the Council says the scheme has been a great success and nominations are now being sought for the next phase, which aims to involve communities in nominating streets that could benefit from a deep clean and to help look after their area once the council has completed its work.

Residents are asked to contact their ward councillor(s) with suggestions of streets they feel could benefit. These may be known 'grot-spots', or places that could do with a general tidy up.

Residents on successful streets will also be asked to sign up to a Street Pride charter, to raise awareness of the responsibilities of both residents and the council in maintaining the district.

Coun Jon Barry, Cabinet member with responsibility for the environment, said: “We should all be taking pride in living in a clean environment. Once the streets are clean, it's up to all of us to keep them that way!"