Appeal after pedestrian struck by car

Local poise are appealing for information after a 15-year-old pedestrian was struck by a car in Heysham on Monday.

The teenage boy was walking on Oxcliffe Road, Heysham, on the railway bridge, at around 4 – 4.30pm on Monday July 5, when he was struck by a small black car.

• Anyone with information about the incident is asked to contact PC Kev Illingworth, road policing unit, on 01524 63333.
Posted by John Freeman at 11:55 No comments:

Poetry, Comic Verse and Molie Baxter, too, at Spotlight

Next Friday's Spotlight Club at the Storey Auditorium is shaping up to be a heady mix of poetry, comic verse and great music, with top Lancaster musician Mollie Baxter leading her new band as part of a great line up.


After the Open Mic session - anything can happen in that half hour as new and established performers try out their work on the audience - Spotlight fans can settle down to poetry from Kim Moore, Gary Smillie and Ron Baker, comic verse from Iain Colley and comedy from Reginald Winters.

Kim Moore was a runner up in the Mslexia 2009 Poetry Competition and has had work accepted in Poetry Review, The Frogmore Papers, Iota and Staple. She's a member of 'A Poem and A Pint' who organise poetry readings in Barrow and writes, usually in the car, in between teaching at different schools, which has the added effect of making her value the time she gets to write.

Liverpool poet Gary Smillie, who also dabbles in short stories, last  appeared at Spotlight in April 2008 and returns this month with a selection of  recent poetrloosley linked  by themes of love  and travel.

Stepping out from  behind the sound  desk to make a rare appearance in  front of the mic,  Spotlight co-founder Ron Baker will be  reading from his  current work in  progress - a  collection of poems  based on his early childhood.

Iain Colley makes a welcome return to the Spotlight. Iain has been contributing  stories, poems and articles to magazines  and newspapers for many years and has a  string of competition successes to his  name - including winning the prestigious London Review of Books 'Poet of The Year'  competition in 2002. An accomplished  performer of his work, Iain will be  performing a selection of new comic verse.

Comedian Reginald Winters describes himself as "an upstanding member of the community.
"I used to be a teacher but was asked to leave," he says. "I play guitar and provide guitar lessons, as well as playing concerts around the north west of England. I also take an active role within my local neighborhood watch scheme and like to go UFO hunting." Sounds intriguing!

The night rounds off with The Moll Baxter Band, voted 'Best Live Act' by the Lunecy Review back in the New Year. The Moll Baxter Band tells tales about skeletons and highwaymen, nanny-goats and harridans, whisky wine and song. Expect folk-blues, Americana and a few bubbles of pop!

• Compered by John Freeman, Spotlight is on Friday 16th July at The Storey Auditorium, Meeting House Lane,  Lancaster. Doors will be open from 8.00 pm.  Admission £4 / £2 (conc.) Open Mic 8.15 - 8.45 pm. More info: www.spotlightlancaster.co.uk or email: spotlightclub@btinternet.com if you are interested in grabbing an Open Mic slot
Posted by John Freeman at 10:00 No comments:

Cycle away the school holidays

With the summer holidays fast approaching, Lancaster City Council is encouraging youngsters to get out on their bikes with a range of fun training sessions for all ages and abilities.

Cycling is healthy and fun, but it’s best to learn how to do it safely. As part of the council’s Holiday Activity Programme, ‘Bikeability’ cycling courses are running throughout August and will take place at Salt Ayre Sports Centre.

‘Bikeability’ offers children aged between 9 and 16 years Cycling Proficiency for the 21st Century. This course takes place at Salt Ayre and on local roads and will give youngsters the skills and confidence to cycle in modern road conditions.

There are two four-day courses on offer: 2 – 5 August and 23 – 26 August. Children who would like to join the course must be able to attend every day over the four days. Each session will last two hours.

‘Cycle Skills’ is aimed at five to nine year olds who can cycle but want to improve their skills. This is a two hour session.

For younger children who cannot yet ride or are using stabilisers, there is a ‘Learn to Cycle’ course aimed at those aged 4 years and over. Pedals and stabilisers will be removed so that the children can learn to balance before they progress to pedalling.

All courses cost £6 and children must bring a roadworthy bike and suitable clothes for being outdoors. Children under 8 should be accompanied by an adult.

Also new this year is Family Cycle Skills - a chance for the whole family to learn together. This course takes place off-road, is open to all abilities and will be lots of fun, focusing on basic control skills, use of gears and riding on the roads. This is a morning or afternoon session, costing just £3.

Posted by John Freeman at 14:36 No comments:

McGuinness gets back on track at Knockhill 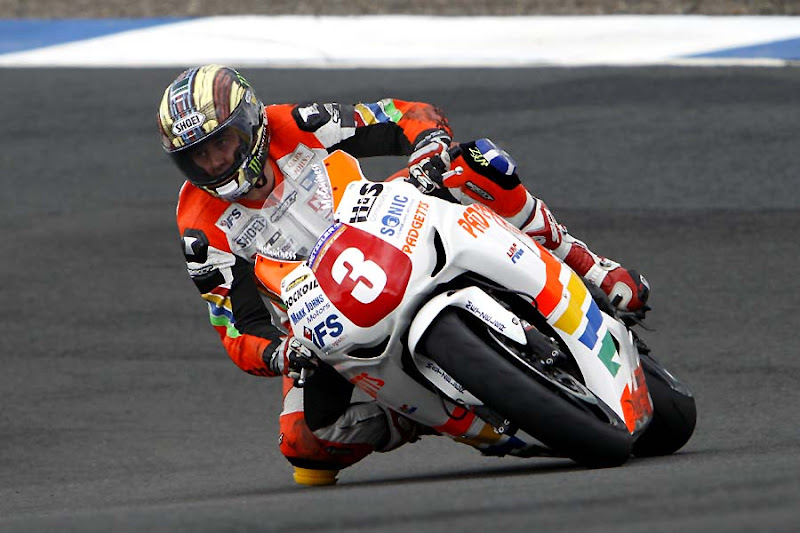 Morecambe motorcycling star John McGuinness got his short circuit season back on track on Sunday when he finished in fifth place at Knockhill in the latest round of the Metzeler National 1000cc Superstock Championship, Phil Wain reports, and credits his wife with getting him back on track after a few bad results.

The Padgetts Honda rider put in an excellent ride in difficult conditions and, having qualified in eighth place, he utilised his smooth riding style to move steadily forward during the race and was rewarded with 11 hard-earned Championship points.

With free practice and qualifying being held in dry conditions, the riders were met with a very different proposition on Sunday with strong winds and heavy rain hitting the Scottish venue. With the race cut from 22 laps to 15, a good start was imperative and John got just that and moved up from 8th to 6th on the opening lap.

In what was largely an uneventful race for John, he remained in sixth for the next few laps before being promoted up to 5th on lap 7 when Scott Smart dropped out of the race. Towards the end of the race more rain began to fall, just as John closed in on Tristan Palmer, and with the weather worsening all the time, organisers stopped the race on the 13th lap due to the inclement conditions thus denying him the opportunity of moving up to 4th although the 11 championship points for 5th came in very handy.

Speaking afterwards, a pleased John said "I needed that! I've had a tough few weeks what with the disappointments at the TT and that so to come away with a top five finish is very pleasing and it's great to be back mixing it with the front runners.

"My confidence had taken a bit of a dip after the TT and Silverstone and the missus (Becky) gave me a real good pep talk and told me to get my dummy back in, stop dwelling on things and just get on with it! I spent a bit of practice circulating with my team-mate Glen Richards and it definitely helped get me back in the zone so after qualifying well I was feeling in good shape for the race."

"I got a good start and was right with the front group and felt comfortable with the pace we were running at. Conditions were a bit sketchy with probably 80% of the track dry but the rest damp so you really had to concentrate hard to make sure you didn't stray off line and I did just that. We'd opened up a bit of a gap to the riders behind and I was hopeful of moving up to 4th but the rain began to come down and it was the right decision to stop the race.

"Fifth is very satisfying and it's got my short circuit season back on track so I'll now look to build on this result and make sure we're there or thereabouts for the entire second half of the season."

The result moves him back up to 10th overall in the Championship table with the next round taking place at Snetterton, Norfolk on July 16-18.

Picture by Glynne Lewis
Posted by John Freeman at 08:15 No comments: