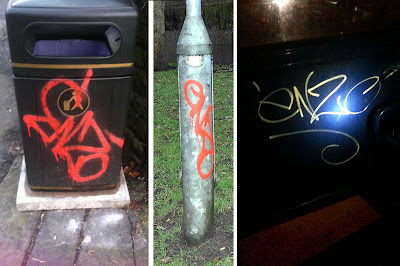 Lancaster police are appealing for information after areas around the Castle area of the city have become the repeat target for graffiti.

Residents have complained to police about the 'tagging' over the last month, with bins, lamp posts, garden fences, telephone kiosks and bus stops all sprayed with the same graffiti tag 'enzo'.

The tag is a general one, as this page on the graffiti site RobotsWillKill reveals, originally used by the son of London barrister Zen Slocombe who was found guilty of criminal damage for his activities back in 2002. London police told the Evening Standard they believed he had caused £1 million worth of damage to trains and stations in a criminal career that started when he was 15.

It took police several months to determine that a rash of graffiti appearing on Tube trains was his work. He was eventually caught on CCTV defacing a train at South Wimbledon station and then went on the run after he failed to turn up in court.

The use of the 'enzo' tag is often considered homage to Zen's activities and it's been emulated across the globe.

PCSO Amy Knott works closely with residents in the area and is appealing for anyone who may have any information to come forward.

“This graffiti is making the area appear untidy and is costing local residents time and money to have the damage removed," she says.  “We have made a number of enquiries around the local area and I am now appealing for the help of local people to report any suspicious behaviour to us.

“If anyone thinks they might know who is responsible then I would ask then to come forward and contact police.”