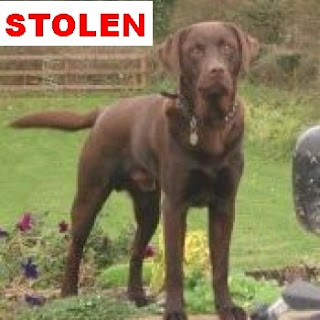 The owners of a Chocolate Labrador stolen from Forton in April are offering a substantial reward for his safe return.

Four-year-old Brook was taken from his owners' garden on Saturday 16th April and Aubrey and Caroline Hoyles have since mounted a nationwide campaign to try to get him back,  including an appeal on ITV's This Morning earlier this month and leaflets and posters circulated around the Lancaster area.

Brook has a small white fleck on his chest and a slight kink in his tail. It's possible he was picked up and not reported to the Council Dog Warden (which is the law), but his family would dearly love to see him returned and are offering a £2000 reward. 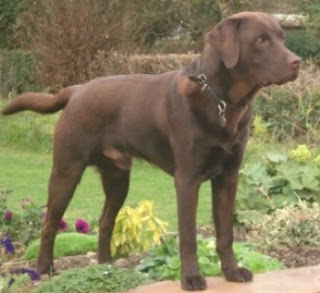 "Brook came to live with us when he was just a few weeks old," says Caroline Hoyle via the Find Brook Facebook Group. "Not only was he a birthday surprise for me, but the first time I met him he had an engagement ring tied around his neck! This makes him even more special to Aubrey and myself.

"He has always had a lovely life with us, and we dread to think what life is like for him now... he will be missing home so badly!"

Since the appeal,  a chocolate Labrador was spotted a week last Tuesday in Elswick, eating a rabbit at the side of the road: and there has also been a sighting in Great Eccleston, much closer to Forton. Neither of course, not be Brook - there are a lot of lost dogs out there - but over 800 people are now helping the Hoyles track him down on Facebook.

• Doglost is a free service run by volunteers reuniting dogs with their owners: www.doglost.co.uk
Posted by John Freeman at 09:13