Goodbye to the Guardian

A quicker reminder that, sadly, the Lancaster Guardian no longer has an office in Lancaster itself.
You can still contact the paper's reporters, now based in Morecambe, on 01524 32525. 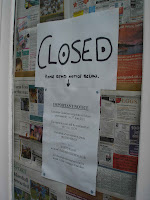 The newspaper announced a 'consultation' on its planned office closure in May but the decision seems to have been made pretty quickly as they closed very soon after it was announced, on 3rd June.
Journalists have condemned the cost-saving move.

"Johnstons could at least let the reporters work from home, sparing them the ordeal of the trudge to and from Morecambe in traffic which is never less than horrendous," commented former Guardian reporter Tom Henry. "For a city like Lancaster not to have local journalists working on the patch is appalling.

"They’re called NEWSpapers for a reason, and reporters need to have a local base," said another. "It’s as much about community involvement as coverage."
Posted by John Freeman at 15:40

Bring back the Citizen!
A quality free that had news and local trader adverts too.

It is so sad to walk past the building and see it... I'm not sure about the newspaper in the window... does it remind you of the heritage ... or a final act of cost cutting?

Does Johnson Press still own the building???

I really hope it doesn't become a charity shop, maybe VirtLancaster could move in :P