Lancaster Teachers on the Picket Lines 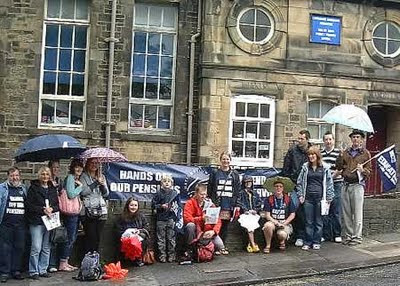 Picket lines stood outside Lancaster schools yesterday, probably the most courteous and kindly pickets in history. 'Good Morning' was the most revolutionary chant to be heard, as they handed out explanatory leaflets to the odd parent who turned up with children.
Supportive workers with slower unions, who supported the strike but weren't yet allowed to join it, brought out cups of tea.

I saw 3 members of Unison come up to strikers to apolgise for not being out on strike as well, and promising that their own union would be striking by the Autumn. I heard promises that the NUT would join them. One woman said her pay was cut by £800 a year, her pension contributions increased and her pension, that she had contributed to and worked for on a low wage, starting at 6am daily, over 20 years, cut to shreds.

Others were less friendly, the lollipop lady disgusted at their dereliction. 'I've never been on strike in my life! It's letting the children down.' 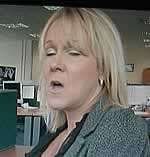 Fleetwood couple Anne & Nick Beenham were so unhappy at having to bring their children into work with them at Lancaster's Local Linkup marketing office that they appeared on BBC North West Tonight. Anne said, 'Things are hard for us in the private sector. I have no pension. My wages haven't been raised in the last few years.'

Anne worries me. The average Public sector pension is £6000pa. It's not much if your roof needs fixing or you need a stairlift, but it's better than nothing, which is where Anne sees herself. A private sector pension is an opt-in thing. You shop around, sign up and settle to making your monthly payments. You contribute to a pot. It's a bonded savings agreement for an annuity that will provide an income when/if you reach a certain age. But only if you have made the payments. Unlike Anne. Unlike most women in the private sector in fact, whose careers are often broken up by having children.

So when you lose your pension, you are losing your own savings. It's like a bank going broke and you losing your savings. Except the teachers' scheme is an opt-out scheme with a pot originally set up before the welfare state by a union of women teachers, who were not allowed to marry, so devised the scheme independently to avoid destitution in old age. It's unlikely they were better off then than Ann is now. They were desperate. As schools were taken over by the state their scheme and its pot was eventually passed over to be run by the employers as part of the state scheme, for the benefit of all teachers. It is designed for the welfare of the members, not a profit-making corporation. It has been audited, adjusted, contributions by the teachers were increased some years ago, and it is sound. The heritage of those diligent, careful women.

As one of the few remaining such pots, it is being raided, by the government, to fund tax avoidance and fiscal irresponsibility. Just as private interests already raided the less-guarded pension pots of their own companies. Employers took 'holidays' from making their contributions during the rich times and paid themselves dividends, instead of laying by for the hard times to follow. They invested the funds unsoundly with their own interests. This was tax-avoidance in another form. 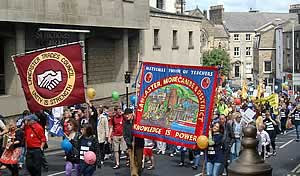 At 11am the strike's supporters rallied in Market Square and bacame an unscheduled march by about 400 people around Lancaster City Centre, led by a marching band.

It wound around the town centre, with the assistance of just two competent police officers who happened to be on hand to complement the stewards. 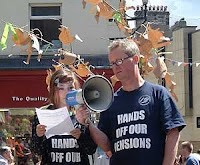 Speeches followed in Market Square, not only from teachers but also other services under threat, most notably about the NHS privatisation. The most memorable came from schoolgirl Molly Pye, who said "Putting private business in charge of health is like putting Dr Frankenstein in charge of transplants'.

Others pointed out that half the UK's private wealth is owned by just the richest 10% of the people, who are getting even richer out of the recession, and set to get richer still through privatisation, while the rest of us are told we must make sacrifices.

I'd say this strike day was just a taste. Public sector workers haven't had a fight like this in a generation, and like all new things in the public sector, it will be long in getting started, with many meetings. But now the millwheels have begun to grind, there will be no stopping them until the whole loaf is sliced out.
Posted by Chris Satori at 10:16