Another new wind farm for Heysham? 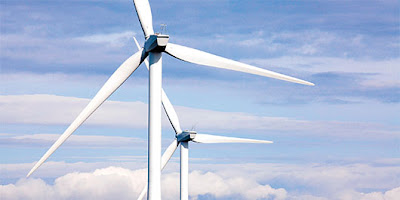 Plans for a proposed new wind farm in Lancaster are set to go on show to the public at two exhibitions being held later this month.

Banks Renewables, part of the Banks Group based in County Durham, is putting forward plans for the proposed Heysham South development, which would be situated on agricultural land to the south of the A683, around 1km to the south east of Heysham itself.

The scheme will consist of three turbines with a maximum tip height of 125m, and would have an installed capacity of up to 7.5MW, which is enough to meet the annual power requirements of around 4,200 homes.

The scheme would see an investment of approximately £7.5 million by Banks Renewables to build the wind farm, and during construction between 10 and fifty people would be employed on the site at any one time.

The proposed site falls within an area that has previously been identified by Lancaster City Council as somewhere where wind farm development should be promoted and encouraged, and Banks will now be showing residents the finalised design of the scheme.

The exhibitions will both take place between 3pm and 7.00pm on Wednesday 13th July at Middleton Parish Hall on Low Road in Middleton, and at Overton & District Memorial Hall on Middleton Road, Overton.

Representatives of Banks Renewables will be on hand at both events to answer any questions visitors have about the scheme and to gather feedback from them.

Exhibition visitors will be able to see accurate photomontages of how the wind turbines would look from different vantage points around the area, and they will also be able to make suggestions about the sorts of new local facilities that could be funded through the dedicated community benefits scheme that would be introduced if the scheme is approved.

Banks is one of the UK’s leading developers in the wind farm sector, and has a number of similar completed and ongoing projects at various stages of development across the north of England and Scotland.

“The Heysham South project has the potential to make a significant contribution to low carbon energy generation in Lancaster," argues

Phil Dyke, development director at Banks Renewables, says:, "and to also have a very positive impact on local residents.
“Working closely with local communities is central to the development process for all our proposals, and we’re keen to hear local people’s ideas about how they would like to see the wind farm, should it be approved, provide support and funding for local community groups and initiatives, in order to help ensure that our presence in the area has a tangible positive long-term impact.

“If planning permission is granted Banks will provide funding to enable the establishment of a Warm Zone," he continues. "This would help alleviate fuel poverty in the area and would have the potential to create up to 50 jobs in the area to deliver the scheme. In addition there will be a community benefits fund of at least £10,000 per annum to support local groups and projects.

“The site we’re proposing to develop is not subject to any landscape, cultural or heritage restrictions, and our professional planning opinion is that this is an excellent location for a wind farm of this type.

“The forthcoming exhibitions are a key part of the public consultation process that we are carrying out around this scheme, and we hope as many people as possible will come along to find out more for themselves about our plans, so they can then make up their minds about them based on accurate information.”

This proposal from Banks Renewables comes hot on the heels of plans for three wind turbines from Peel Energy at Heysham Port, which would be located on the sea front near Heysham Power Station.

The Port of Heysham Wind Farm is a proposal to install up to three turbines on the dock wall in the Port of Heysham. The scheme, with a capacity of up to 9MW, would be designed to have an operational life of at least 25 years and Peel Energy say they could generate enough electricity to meet the average needs of approximately 4, 600 homes – 50 per cent of the households in Heysham.

• A planning application for the Banks Renewables plan is expected to be submitted to Lancaster City Council before the end of the summer. Anyone who is unable to attend the exhibitions, but who would like more information on the Heysham South proposals or to express an opinion about them, can contact Banks’ community relations team on 0191 378 6100 or email heyshamsouth@banksgroup.co.uk

• View the Proposed Peel Energy Harbour Turbine Development Site here or read a summary of their recent presentation via Heysham Online. (Be aware, this is a sizeable file, approximately 13mb, and takes a few seconds to download).
Posted by John Freeman at 13:20

As a local resident I spoke to Banks Renewable and had an in-depth chat with Gayle.

I was most curious about their plan to "pump prime" a Warm Zone initiative with £50k to obtain national funding to roll out insulation initiatives across the district. I did inform them that there is already LESS that does work in this area, so be would be better to differentiate themselves slightly, be that geography or reach to prevent duplication.

Are you attending the public consultations in Middleton and Overton? Get in touch

I've put online maps of the turbines for the curious.