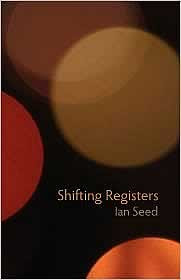 Ian Seed is lecturer for Creative Writing at Cumbria University and editor of the webzine Shadowtrain. Shifting Registers is his second collection of poetry.

All this sounds like thirsty work, and work is the word for this collection; the incessant labour of interpretation is simultaneously enlightening and infuriating.
If you’re a fastidious reader whose page flutters at the prospect of a challenge, or a disillusioned soul wishing to be plucked out of your comfort zone and shaken into a new mode of thought, then perhaps this Seed should be planted in your life.

What we have here is difficult poetry. No literal route is provided and meaning comes in slow drops like ‘rain’. So we must be active readers bravely braced for the semantic storm, not lounging in luxury, with poetry as sweet liquor resting in our glass. Each poem is like a closed flower, opening only when lit by our questions. Each word often points to more than its various dictionary definitions, reminding us with its sound of yet another. Each resonates with an emotional echo.

There’s no escape after we’ve put the book down either, and fragmentary shapes still haunt our most vulnerable moments of passivity and sleep: a steam train rushing through a landscape of snow, barely discernible beneath a plume of white steam. Disembodied. Unfathomable. Often the image received is contrary to what we would expect, for ‘there’s nothing/ literal about watching [a]…weightless/ train’. But patience, there’s method in the madness since the overall effect is one of reconciling otherwise disparate elements into a holistic image, albeit an image founded upon uncertainty, as when he writes that ‘the fusion of the face / with its shadow is total in verisimilitude’.

Seed’s work may be criticised on the grounds that it has little to offer the casual reader. Every poem keeps its cards close to its chest, insisting upon the reader’s sociable dialogue before revealing its hand. When all's said and done there’s a label for this kind of literature – postmodernism. Shifting Registers typifies postmodernism because it rejects structure and regimen in favour of a far more slippery kind of meaning. From the offing ‘Note-taking’ and ‘Theory’ give the impression of the academic nature of these pieces, even if the end result is to reject the absolutism of critical analysis and theoretical schools. There’re some more accessible moments in the prose poems of the collection but the vast majority aren’t so forgiving.

Sometimes we encounter a poem more like an obdurate stone than a proud flower. Words smugly resist interpretation, or jar dissonantly with the rest of the line, simply lying there looking increasingly worn, like those coins in the pavement inside Marketgate. What for instance does an ‘olive warning of destruction’ have to do with ‘moths and flying’? Yet one of the clever effects of these poems is their ability to provoke thought, even when we think we’ve got it sussed.

There’s no doubt time and energy has been invested in these poems, and to truly appreciate them we must commit time and energy too. Shifting Registers is ideal for those who want to be challenged by their reading, or better yet, to be the challengers themselves. The crucial point seems to be that there’s literature of value here, ideas worth rolling around in the tired grey matter upstairs; bringing both light and shadow, blending them, making you nervous.