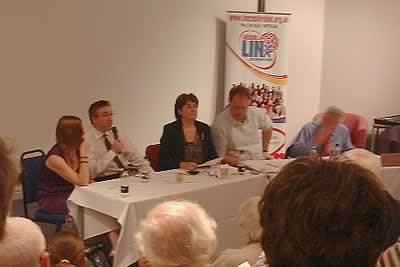 Lancashire LINk played host to a 'Question Time' styled debate on NHS privatisation plans last Thursday evening at the University of Cumbria in Lancaster. On the panel were Eric Ollerenshaw MP for Lancaster & Fleetwood, Dr David Wrigley, Carnforth GP and elected BMA board member, Caroline Collins of Lancashire LINk and Brian Rhodes, Senior Consultant in Trauma Orthopoedics at the RLI and Fellow of the Royal College of Surgeons.

Eric Ollerenshaw seems a strange man. While people asked their questions and panel members debated issues, they did so over the visual noise of Mr Ollerenshaw playing with his papers, vigorously shaking his head, pulling faces, rolling his eyes, clapping his hands over his head, his eyes, his ears and studiously doodling whenever anyone tried to speak to him. He bounced about so much I just couldn't get a still photo of him.
It was a bit like having a sign language interpreter gesticulating from the sidelines - but, in his case, a deaf one reading from a panto script. In fact it is, of course, what parliamentary hacks do all day in Westminster. He did deliver four arguments, in repeated rotation:

1. NHS cancer care is worse than any other European country.
2. The government has increased NHS spending and services are improving
3. There are more old people than we can afford to care for.
4. Everyone here is against me.

It was pointed out to him by Dr Wrigley (and others), that the cancer care study Mr Ollerenshaw quoted had said, in fact, that in Europe only France had better outcomes than the UK in cancer treatment. It had been published over two years ago. Intervening studies showed rapid improvement since then which pointed to even those misquoted statistics no longer being accurate. A German doctor present stated his opinion that the NHS was better organised for patient outcomes than German healthcare. Mr Ollerenshaw kept shaking his head, regardless.

The fact that the government has called for £20billion in savings from the NHS - almost one-fifth of its total budget, sat uncomfortably alongside Mr Ollerenshaw's assertion that the government had increased NHS spending. Wards have been cut and a host of medical procedures can no longer be offered to patients. Local mental health facilities, set up after the closure of the big regional asylums, have been closed and sold off - in favour of inaccessible regional treatment centres. Children and adolescents with mental health problems are routinely admitted to adult acute psychiatric wards, for lack of any suitable pediatric facilities. Clinics, accident and emergency centres and outpatients facilities have been closed and centralised. Waiting lists are growing and some have been lapsed entirely. Existing contracts with private healthcare companies under PFI have saddled the regional health authorities forced into them with crippling costs for decades.

The burden of meeting increasingly expensive healthcare costs for elderly people falls more heavily on the poor and their families. As do insurance costs that rise with age. US healthcare costs are triple those of the UK, per capita, with significantly poorer public health outcomes. More people out of every hundred get sicker, and stay sicker for longer in the US. This costs them three times as much, thanks to their private healthcare structure, than is currently paid by us in the UK.

In one unlucky day, in the US, you can lose your job, your savings and your home, to pay for one round of surgery, which may not be covered by standard insurance. Or you simply may not get the treatment you need to survive. Privatisation will draw a hard line between communities. Between the rich and the vulnerable.

It was pointed out that GPs are self-employed, working under contract to the NHS. The Bill would make them managers of all local commissioning of medical services to their patients. This means private businesses being given control of determining how public funds should be allocated to buy the treatments their patients need. GP advice has enormous influence on patient choice. It should be trustworthy, but some GPs consortia have already set up private operating theatres where they perform simple procedures. So they are in a position to direct NHS customers to their own business, which they can then pay out of their NHS budget and make a profit.

One audience member noted, to much agreement, that dentistry had been badly affected by privatisation, with most NHS patients now unable to access basic NHS dental procedures because of budgetary constraints and being routinely obliged to take up private options and insurance.

Certain medical procedures are done routinely, are simple and don't require very expensive equipment and aftercare. These can be done profitably. Others are complex, require specialist staff, expensive equipment and resources, and intensive follow-up. These cost, but every simple procedure was complex once. If private hospitals and clinics can cherrypick the profitable commissions and leave the expensive and pioneering work to the NHS, the NHS will not have the funds to do it. That money will have been paid in dividends to shareholders of private companies, not invested in patient care and the quality of the service will plummet even faster than it already is with the cuts.

Mr Ollerenshaw was largely correct in his fourth point, if confused on his others. The audience seemed packed with healthcare professionals and patients, potential and actual, expressing alarm and concern at the dangers the proposed bill presents. Dr Maggie Mort, chairing the meeting on behalf of Lancashire LINk, asked him if, having listened to the views of local constituents and health professional, he would take their views back to parliament. I couldn't make out his response but his attention seemed alsewhere and his body language seemed to say, 'yeah, whatever...'.

Tomorrow (Tuesday 5 July 2011) is the 63rd Birthday of the NHS, founded in 1948 at a time when thousands of war-injured ex-servicemen, ex-POWs and civilians needed care and when the national debt was proportionately three times what it is now.

From 5.30 - 7pm there will be a birthday celebration for the NHS in Lancaster's Dalton Square. All are invited to bring sandwiches, tea, cakes etc. Let's make sure that this isn't the last birthday of the most cost-effective national healthcare service in the developed world.

Keep Our NHS Public
Posted by Chris Satori at 22:06

A very accurate representation of the event- thanks for this. I was astounded at our local MP's lack of attention to the warnings of healthcare experts. Not much sign of listening around these parts, sadly.

Funny, the last figures I saw showed that you're more likely to die of cancer in the UK than anywhere in Europe, due to the late detection of cancer, the refusal to use more expensive treatment, etc.

But I'm still against the privatisation of the NHS.

Don't agree that our local MP played the fool. The event was supposed to be a radio/tv Question Time whose format is 2/3 political opponents and 1/2 neutrals. Instead Eric was faced by three NHS experts opposed to the changes and an audience of well informed people among whom no supporter of the changes could be found. He had clearly believed the Tory propaganda with which he had been briefed and was equally clearly taken aback by expert evidence demolishing every aspect of it. Little wonder that he buried his head in his hands when faced by an hostile panel and audience who didn't believe a word he said. I was surprised he stuck it out and didn't walk out.
I am. of course, fiercely opposed to the destruction of the NHS. We have drifted into a de facto elected dictatorship. That the dictators are millionaires by inheritance, who have never had to work for a living, have never done a real job and whose ignorance of the real world is only matched by Napoleon's Josephine, explains why we now have naive policies dreamed up by posh sixth form prefects pontificating whilst slugging their after-dinner brandies. Far out.