The St. Nicholas Arcades revamp is proceeding apace in Lancaster, with work well underway on re-developing the retail hub, with completion on course for early next year.

Warrington-based Globe - who have an office in Lancaster - are the appointed contractor on the project, best known for recent completion of Morecambe's new Football Stadium,"The Globe Arena".

The works - which include the building of an all-new store for clothes retailer Next - commenced in early August with an expected completion date of Spring 2012.

"The first phase involved seperating the construction site from the working shopping centre," says Arcades manager Jerry North, "through construction of a temporary mall connecting the Arcades from the side of Boots to Argos main entrance. This allows works to continue during the trading day with minimum disruption to our operating tenants.

"The contractor has a tight timescale of available working time outside trading hours to remove demolition materials from site anddeliver construction stuff to site. Obviously the location of the Arcades and the need to operate normally during trading times puts severe constraints on the contractor and he is having to work hard to keep on programme.

"Our first target is to hand over a completed shell to Next by Christmas this year in order that they can then carry out their shopfitting works to be opened for March." 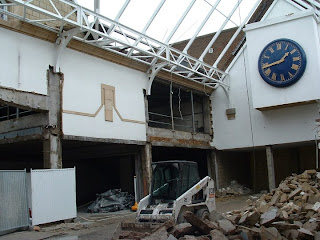 Despite the country's economic woes, Jerry says the revamp has caught the attention of many prospective tennants and with Bright House and Poundland new arrivals at the Arcades, despite the revamp, 2012 looks set to be a good year for this major retail focus, which also hosts Boots and the Early Learning Centre.

"Our lettings agents are reporting good interest in the other newly created units and it is hoped we should soon have some exciting anouncements to make," he teases.