Harvison, Bartley, back for more folk at the Gillow in October

Folk Music continues aplenty at Lancaster's  Robert Gillow in October, in a line up that includes the ever brilliant Jon Harvison, back at the popular venue for another performance. Here's the line-up...

From Keighley, Jon Harvison plays guitar and sings. He has an exceptionally powerful voice and is acknowledged as being “one of the finest exponents of English contemporary folk song” (Folk On Tap magazine).

The planned set will be a mixture of his own material, other contemporary song and traditional English and Scottish folk.

On tour from Ireland, 2011 sees Rodney Cordner and Jean-Pierre Rudolph celebrating 30 years on the road. They are perhaps one of the most unique acoustic-duos around, combining the wit of the Irish with the charm of the French and also one of the best kept secrets on the acoustic music scene.

They came together in the 1980's and since then have released nine albums and toured extensively in more than 20 countries. Playing in almost every type of venue, they've also appeared on over 50 TV and radio shows and had the best selling acoustic album of the year, Measure of Dreams in Germany.

On stage they use fiddle, guitar, flute, mandolin, tin-whistles and bodhran to perform traditional, contemporary and original songs, mostly in the celtic style with a little swing jazz thrown in for good measure and strongly laced with humour and audience participation. 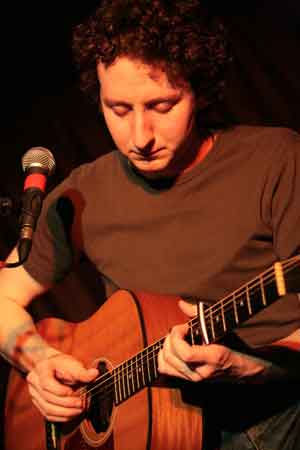 A "phenomenal guitarist and singer", Gren Bartley - who has made several appearances at the Gillow - is deeply rooted in old folk and blues traditions whilst stamping his own style on the genre. Whilst the first thing you'll hear is his virtuosity on guitar, it is his mature vocals and poetically crafted lyrics that ensure the longevity of this young musician's career.

His first full solo album Carry Her Safe is a collection of original songs and tunes, played on guitar and banjo. His second CD e°g°,  with fiddle sensation Tom Kitching, led to a record deal with folk stalwarts Fellside Records.

He is often compared to the likes of Richard Thompson, Nic Jones and Kelly Joe Phelps - an emerging talent not to be missed.

This is only Phil’s second visit to the Robert Gillow - a solid, stonkin’ bluesman who will entertain and delight you. He plays guitar and harmonica and sings, and whether he is playing his own material or rejuvenating classic blues numbers his music is down to earth, genuine and heartfelt.

He says "just like the weather I'm a bit under the moon" and his autobiography reads “after diddling about on guitar and harmonica since my early twenties I decided to try open tuning to entertain myself for the evening. So I twiddled the knobs until it sounded good and enjoyed the freedom of having no idea of what I was doing, years later I’m still enjoying myself.” More about his work at: http://philsaundersblues.co.uk