In Review: We are Three Sisters 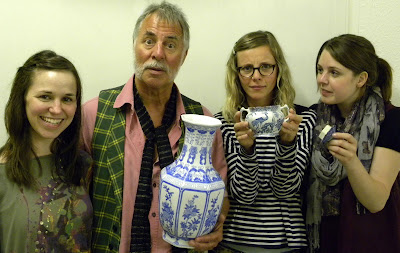 Northen Broadsides' production of Blake Morrison's new play We are Three Sisters, directed by Barrie Rutter, which focusses on the lives of Charlotte, Emily and Anne Bronte as young adults, faces a particular challenge. Not only does it have to cater for those who are familiar with the Brontes and their work, and those who are not, it also has to consider those familar with Chekhov's Three Sisters and those who are not. For the three most famous Brontes have been shoehorned into the Chekhov play. There is a logic to this: Chekhov was well aware of the lives of the Brontes before he wrote his play, and Morrison has completed the circle. And while this works in that there is a clear sense of watching Chekhov - the intense conversations, the characters who come and talk and go, the wishing things were otherwise, all of which must have been characteristic of life in Haworth Parsonage too - for me, the effect was somewhat strained, and also something of a distraction. It may be a coincidence, but - with the exception of Eileen O'Brien's Tabby, the servant - the characters whose parts most closely corresponded to what actually happened were also the most convincing.
Much of the acting is excellent, particularly Catherine Kinsella's Charlotte, Rebecca Hutchinson's Anne, and, best of all, Sophia di Martino's sardonic Emily. These three young actors show us three close siblings, as well as three highly different (and differentiated) individuals. They also do full justice to probably the best aspect of Morrison's script - when the three Bronte women are talking together, alone, and in particular when there are tensions and when they disagree about how they should be living their lives. The Yorkshire accents (and their father Patrick's (Duggie Brown) Irish one) are done well and consistently. Gareth Cassidy plays the tragic brother Branwell, alcoholic, in debt and in unrequited love, without being melodramatic, and elicits a measure of sympathy from the audience as well as from his sister Emily.

The set is the same throughout both Acts - the parsonage reception/dining room - with two gravestones to the left, a reminder of the omni-presence of death in the family, as well as in the insanitary village. Even the stone-flagged floor is like a churchyard. This is echoed with constant coughing - anticipating the TB that proved to be fatal. The 'sameness' is interrupted just once - when Anne and Charlotte return from London having said to their sceptical publisher 'We are three sisters' - full of excitement about life outside the Parsonage. This is shown well with sound effects of the train, and changed lighting, and brings a welcome change of pace. And this is needed - Act 1 seemed to amble along rather slowly; Act 2 picked up the pace.

Although this is a sad and serious play, it is to the credit of Morrison's script and its delivery that it also elicited some laughs. I will finish with one of these. When Charlotte has just told her father Patrick about Jane Eyre, has handed him a published copy, for which the printing, she explains, has been paid for by the publisher, Patrick says "They must be daft. Nobody's heard of you."

"What good will that do?" replies Patrick. "No-one's heard of him, either."

Posted by Jane Sunderland at 10:25