All Aboard the Soccer Shuttle! 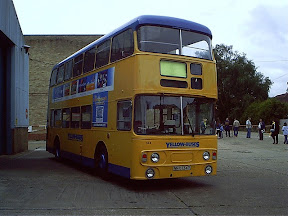 A private bus service to get Morecambe football fans to the Globe will be up and running in time for their home game against Wimbledon next Saturday.

The news will be welcomed by the fans who have pointed to the lack of a public bus service to the Shrimps new ground, which it's claimed has damaged attendance.

The Morecambe Heritage Bus Company, in association with Fans' Club Morecambe have announced their bus service for supporters around the district to transport them to home games, starting this coming Saturday (8th October) for the home game versus AFC Wimbledon.

The service will start at Lancaster University from 1.00pm and travel along the regular 2A route with a small diversion to pick up fans on Bowerham Road. The service will continue along Torrisholme Road and to the Globe Arena prior to doing a loop of Morecambe and can be flagged down from any bus stop on the route.

The aims are to encourage more fans to watch the league pacesetters, take fans right to the ground and so reduce personal car use and ease congestion and parking issues around the Globe Arena.

David Lord, of the Morecambe Heritage Bus Company, and Darren Clifford, chair of the supporters club, have been in discussions for some time to organise the service.

"We’re really pleased to be working with the Heritage Bus Company," says Darrem, "and to be able to provide this service for supporters.

"We'll be looking to trial the scheme in the next few weeks and hopefully it will prove popular with supporters old and new," David added.

“It’s exciting times at Morecambe Football Club with Jim Bentley's lads doing so well, hopefully fans will see the bus service as a fun and convenient way to travel to the game."

- Contact the Morecambe Heritage Bus Company on 07980676810, or email david-lordATsky.com. A more detailed timetable will be announced soon.