Wear your red (or white) poppy with pride on Remembrance Day

The Mayor of Lancaster, Coun Paul Woodruff, is urging people to take time out to remember all those who have died or been injured in the service of their country.

This year Remembrance Sunday falls on 13th November and a number of services have been arranged in the Lancaster district.

Coun Woodruff is asking everyone who lives in the district to take the time to remember all who died for their country in the two World Wars and also those injured or traumatised by more recent operations overseas.

Since 1921 the Royal British Legion’s mission has been to help those members of the serving and ex-service community who needed it.

Eighty eight years later the Legion continues to safeguard the welfare, interests and memory of those who are serving or who have served in the Armed Forces.

The Poppy Appeal provides the main source of funds to maintain the Legion’s many welfare and benevolent schemes in which over 300,000 people are helped each year.

“The Poppy Appeal is the main source of funding that directly supports the Legion’s welfare and benevolent work," says Coun Woodruff. "The calls upon the Legion’s Services continue to grow with each passing year and it is expected that the need for Poppy Appeal funds will continue for many years.

The red poppy was chosen to remember the fallen of the First World War after those who fought in Belgium and northern France remarked on the extraordinary persistence and profusion of an apparently fragile flower: the cornfield poppy, which splashed its blood-red blooms over the fields every summer. It blooms there to this day, on the fields now returned to the farming they were meant for, and from which the bones of the dead are still collected as the farmers' ploughs uncover them.

The British Legion  produces over 32 million 'lapel' poppies, 100,000 wreaths and 400,000 Remembrance crosses annually, and they're seen most prominently in the lapels of people normally discouraged (or even barred) from advertising their favourite charities - such as politicians, the police, and TV newsreaders.

“Remembrance Day ceremonies and participation in the two minutes silence on November 11 each year provide a special focus for communities to remember those who have given their lives in the service of their country.  I urge local people to give generously to the Royal British Legion Poppy Day Appeal and wear your poppy with pride.” 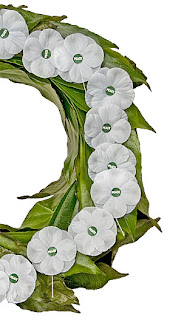 Those concerned by the military connections of the red poppy might want to consider a Peace Pledge Union white poppy instead, which are on sale locally in Single Step, Lancaster.

The Peace Pledge Union notes that the red poppy has had its problems. Some people who have chosen not to wear it have faced anger and abuse. "It's also got involved with politics," they note. "In Northern Ireland, for example, it became regarded as a Protestant Loyalist symbol because of its connection with British patriotism. And a growing number of people have been concerned about the poppy's association with military power and the justification of war.

"Some people have wondered why, with a state welfare system, the services of the British Legion (slogan: 'Honour the dead, care for the living') are still needed; some say it's disgraceful that they were ever needed at all - though the many suffering people who have depended on help from the British Legion are profoundly grateful. (Governments have been grateful too: 'Governments cannot do everything. They cannot introduce the sympathetic touch of a voluntary organisation'!)

"But the question lingers: if the dead are said to have 'sacrificed' their lives, then why weren't the living, who came out of the same danger, being suitably honoured and cared for by the state that sent them into it? The language of Remembrance, in the light of that, looks more like propaganda than passion.

Contrary to the claims of some in the press, the idea of decoupling Armistice Day, the red poppy and later Remembrance Day from their military culture dates isn't new. It actually dates back to 1926, just a few years after the British Legion was persuaded to try using the red poppy as a fundraising tool in Britain.


A member of the No More War Movement suggested that the British Legion should be asked to imprint 'No More War' in the centre of the red poppies instead of ‘Haig Fund’ and failing this, pacifists should make their own flowers.

The Peace Pledge Union, which has been working for peace since 1934, notes that details of any discussion with the British Legion are unknown but as the centre of the red poppy displayed the ‘Haig Fund’ imprint until 1994 it was clearly not successful. A few years later the idea was again discussed by the Co-operative Women's Guild who in 1933 produced the first white poppies to be worn on Armistice Day (later called Remembrance Day).

The Guild stressed that the white poppy was not intended as an insult to those who died in the First World War - a war in which many of the women lost husbands, brothers, sons and lovers - but a challenge to the continuing drive to war. The following year the newly founded Peace Pledge Union joined the CWG in the distribution of the poppies and later took over their annual promotion. You can read more about white poppies here

• However you wish to mark Remembrance Day, services will take place as follows:

Morecambe
Cenotaph, Marine Road – procession will form up at The Platform at approximately 10.20am for a Service at the Cenotaph at 10.55am.

Carnforth
Parade will leave the Carnforth Town Council offices at 10.35am for a service and wreath laying ceremony at the Cenotaph.

To help people to pay their respects, Lancaster City Council has suspended parking charges on the car parks at the Bay Arena in Morecambe and Nelson Street in Lancaster on Sunday 13th November.

• For further information about the services or to express an interest in laying a wreath please contact the Mayor’s Office, Town Hall, Lancaster, LA1 1PJ, telephone (01524) 582070 or email mayor@lancaster.gov.uk