Autonomads, Robb Johnson at the Yorkie 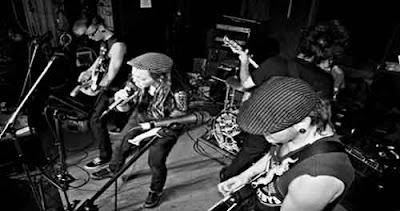 Manchester band The Autonomads make their Lancaster debut at the Yorkshire House this weekend. Their lyrics are a mix of the personal and political and they play tight and energetic punked-up ska with a decent splash of dub, set off perfectly with some nice upfront sax and crowd-pleasing singalong choruses. (They also recently released the brilliant "No Man's Land" album)

Also on the bill are Eastfield whose unique three chord urban rail punk combines politics, trains and catchy lyrics, in a style that is guaranteed to have you up on your feet with a smile on your face.

Black Star Dub Collective are also playing Lancaster for the first time. The squatted terraces of Dickenson Road and the bitter winter of 2009/2010 provided fertile ground for the formation of Black Star Dub Collective. Influenced by bass soaked sound system culture,
radical politics and the reality of the social situation of todays youth, they set out to take their socially concious reggae sounds to the ears of the underground.

The evening begins with protest folk legend Robb Johnson, who's widely recognised as one of the UK's finest and most consistent songwriters. His songs feature in the repertoires of a wide variety of musicians, from folk legend Roy Bailey to acclaimed cabaret diva Barb Jungr, and he enjoys a similarly diverse spectrum of critical acclaim. Dirty Linen described him as “a modern-day Dostoyevsky”, Mojo made the double CD Gentle Men Folk Album Of The Month, while The Daily Telegraph made it their Folk Album Of 1998, and politician Tony Benn says Johnson’s “Winter Turns To Spring” is his favourite song!