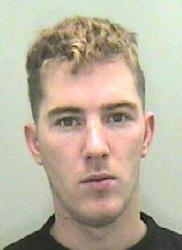 Police are appealing for information about a man who is wanted on prison recall.

Ronald Grimes, 34, formally of Green Street, Lancaster, was originally jailed for robbery in May 2004 when he was imprisoned for six years, having been convicted and sentenced at Preston Crown Court.

He was later released from prison on licence in April 2011 but has since breached the terms of that licence and has therefore been recalled to prison.

As well as being wanted on prison recall, he also is wanted for questioning in connection with an assault that happened in Blackburn in May 2011.

Grimes is described as around 5 feet 10 ten inches tall, with blue eyes and a Merseyside accent. He has four large scars on his lower left arm, and Chinese letter tattoos on both of his arms and a four inch scar on his right knee.

Although he is known to frequent Lancaster, we believe he has strong connections in Birkenhead and Netherton in Merseyside.

Detective Sergeant Paul Greenhalgh said, “We would ask the public, particularly in the Merseyside area to be vigilant and report any sightings to the police - any details could be crucial.”

• Anyone with any information can be passed to police on 08451 25 35 45 or alternatively, people can call independent charity Crimestoppers anonymously on 0800 555 111 or on-line at Crimestoppers-uk.org. No personal details are taken, information is not traced or recorded and you will not go to court.
Posted by John Freeman at 15:27