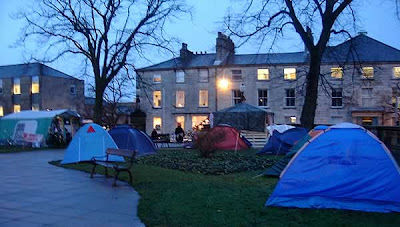 On Wednesday the Occupy Lancaster camp completed its first fortnight in Dalton Square. Tuesday night had already seen a gathering of local folk artists in a rousing session in the meeting tent. Tonight (Thursday) supporters are invited to bring food to share to celebrate two weeks of Occupy Lancaster and two months of Occupy London. More events are planned for the weekend (see below).

The Occupy movement is the stuff of folk songs itself.  Inspired by the Occupy Wall Street campaign for greater fairness and accountability in economics, signs at the Lancaster Camp refer to the vast concentration of wealth among the top 1% of income earners compared to the other 99%.

Two weeks in and despite the battering it has taken from recent winter gales the camp has taken shape. There is heat and electric light, two large tents decorated for the season for meetings, cooking and communal warmth and a hobbity scattering of smaller tents. There were about half a dozen people there, chatting, doing odd jobs, greeting passers-by who stopped to talk. A new sign had been laminated to proclaim the camp ban on alcohol or drugs. The two campers stapling it to an awning enjoyed a discussion over whether it is always ok to say 'no' so negatively. I recognised one as a care worker. A policeman dropped by briefly to say hello.

The Campers hold open discussion meetings, called general assemblies, every evening at 6pm to settle camp business and give out news. It is an interesting process to watch. As one person speaks, others shake their fingers upwards, signalling agreement, or downwards, to mean disagreement. Side discussions occasionally break out but are rapidly checked by the facilitator, who conducts the meeting and queues the people with points to make (they point upwards). It's slow, building consensus between such diverse people but the signalling clearly helps, good will holds and the cold motivates efficiency. On facebook it's more complicated and the camp now has two facebook sites, Occupy Lancaster! a group for discussion and issues, and Occupy Lancaster UK - Practical Support, which is restricted to the practicalities of camp logistics. Such as how the camp needs an electric oil radiator, if anyone can spare one.

The police have a standing invitation to contribute to the meetings and so far relations between camp, police and the City Council appear to have gone smoothly.  Lancaster City Council told Virtual-Lancaster: "Lancaster City Council together with Lancashire Constabulary are committed to allowing peaceful legal demonstrations. We will both continue to monitor the small encampment at Dalton Square and to provide community reassurance."

One camper tells me that a council official came by and explained why the park walls weren't up to the job of anchoring big tents in a gale, which, he added, was good to know.

The Occupy Lancaster Camp schedule of events for next few days is a follows:


12 - 1pm Yarn and Darn: Knitting, Crochet and all yarn crafts. Bring wool & other tools of the trade, some will be provided.

12pm. Economics Discussion: what is the alternative..?

what happened to the camp on Christmas day?

The group announced they would be closing the camp on 24th December in a statement posted on their web page (http://www.occupylancaster.org.uk/) earlier in December.