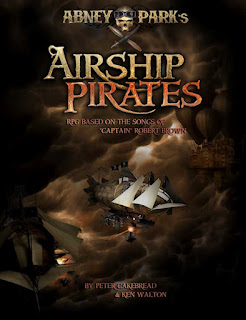 Based on the songs of Seattle-based steampunk band Abney Park, the game book – lavishly illustrated by some of the top steampunk artists in the business – plunges the players into an alternate steam-powered future of strange cultures and weird gadgets. Players take on the roles of the crew of a time-travelling pirate airship in a game of storytelling and imagination.

“When we first contacted Robert Brown, lead singer of Abney Park, about the possibility of creating an RPG based on his songs, we didn’t realise how popular it was going to be,” said Ken Walton. “Steampunk is a much bigger phenomenon in the Unoted States than it is in Britain, so all the interest came as a bit of a surprise! It’s a great honour to win this award and we couldn’t have done it without all the contributions made by Robert, the artists, our publishers, and all the people who voted for us on the day.”

The game has already won the Diehard GameFANS Award for Best RPG Rule Book of 2011 and the Steampunk Chronicle Readers’ Award for Best Steampunk Game, and was shortlisted for an Origins Award too, which is given at the Origins Game Fair in Columbus, Ohio.

Cakebread & Walton: Purveyors of Fine Imaginings, was set up in Lancaster in 2010. Airship Pirates RPG isn’t the only role-playing game they’ve written; the team have also produced the critically-acclaimed Clockwork & Chivalry, game set in an a fantasy version of the English Civil War, fought with magick and clockwork war machines. Both game lines are supported by an increasing number of supplements, and new games are in the pipeline.

Their games are distributed worldwide by Cubicle 7 Entertainment, who also market the Starblazer game based on DC Thomsons 1980s SF comic.

• For more information visit www.cakebreadandwalton.com
Posted by John Freeman at 13:11