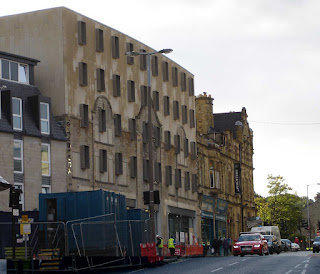 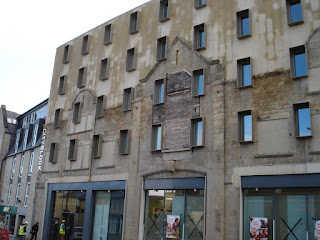 Lancaster residents have expressed outrage at the design of the latest CityBlock student accommodation on Penny Street, some incredulous that the builders have cut into the original Victorian facade to place windows.

"I could design that facade and line up the new windows with the existing ones and add new ones where necessary," noted one, "and still keep the original facade present. "This makes a much sense as letting your toddler loose with a felt pen in a art gallery."

"We were thinking of nominating it for one of these bad design awards!" said another on virtual-lancaster's Facebook page. "Who on earth at the council is responsible for allowing it?"

"it's like something out of my big book of Soviet Architecture," commented another, "Although without the imagination."

When planning permission for the development was originally sought, Lancaster Civic Society condemned the design.

"The proposed redevelopment at Victoria Court is unacceptable for a variety of reasons," they argued. "It would be, in simple terms, one storey to high and, consequently, its scale would be thoroughly out of keeping with adjoining development.

"The scheme, given its dull design ,would be unattractive and would have a significant adverse effect on the character and appearance of the conservation area within which it would be located."

The Civic Society recommended that planning permission be refused for what would be a visually intrusive development on a prominent site on an important road in Lancaster City centre. But permission was given.

Update: The national Guardian featured a photograph from this story in a blog post by Oliver Wainwright, "Some front: the bad developments making a joke of historic buildings" in August 2014

This building is really really bad. The revolution and penny street bridge are beautiful old buildings and they go and build this monstrocity next to them. I would go as far to say it is worse that Tango Towers on Kingsway.

They have taken the most basic concrete block design and rammed it onto the facade, without even a nod at adaptation to the surrounding environment. So, at the southern gatway to the city centre we have this gulag and at the northern gateway is the tango tower at Kingsway. It appears to be a clear signal to potential developers, ie Centros, that the local planning authority will give the nod to any nasty tat that is put in front of them, regardless of public opinion. One wonders why we even bother having a planning authority. Lancaster is changing. Out goes 'heritage city', in comes 'sink city'.

Incidentally, their lowest weekly rent on a single room with shared facilities (inc bills) is £103 - minimum tenancy contract 50 weeks. It is similar to on-campus rent but that is only a 40 week contract - ie over £1000 less p.a. plus a large saving on travel costs, with green spaces outside. The local housing benefit allowance for single room accommodation, based on local rental rates, is £52.
At Cambridge Uni students can get the same basic facilities within an architectural gem for £80pw on a 24 - 30 week per year contract. In other words, it costs around half as much per annum for student accommodation at Cambridge than in a concrete breezeblock in Lancaster.

Some of the comments above seem a little misguided! Cambridge Uni students might get the oppportunity to live in an "architectural gem", however:
- the majority of this accommodation is barely fit for purpose, being cold, draughty, outdated, without ensuite facilities and no access to proper cooking facilities. They're also individually metered electricity and gas usage and billed for that on top of their room rent!
Term-only contracts also mean that students have to completely empty their rooms of possessions during the vacation periods, shipping them home and back again so the colleges can let for those periods to conference/corporate business. I hardly think you're comparing like with like therefore!

yDo LCC really care!? Do they actually have a functioning Planning Department!? Its very embarrassing to see such wilfull destruction..at first i thought it was some sort of photo-shop type of joke!! but no its real. What a disaster,shoddy to say the least!!

According to the Cambridge Uni website the rent 'covers heating, cleaning, internet access and basic self-catering facilities.'
http://www.study.cam.ac.uk/undergraduate/life/accommodation.html.
Read it and weep.

Look at the quality of the rooms as well, compared to modern facilities and note comment about "a trek to the bathroom"....

It's a whole different ball game.
No weeping required.....unless you're forced to live in these pre-victorian standard accommodations....!

If you live in Lancaster uni accommodation, which comes with ensuite cockroaches, look away now.

You missed out the full quote "For some, only a set of palatial sixteenth-century rooms overlooking the grandest court in all of Oxford or Cambridge will do. It can sometimes be a bit of a trek to the bathroom, however."

This truly is vandalism on a grand scale. Grossly ugly, completely out of scale. The mind boggles. it boggles too at the Sainsbury's store beneath it. When was there any consultation about that ?

One wonders11 if our Planning Dept is fit for purpose - if LCC says it is you must then ask 'what purpose and for who's benefit ?"