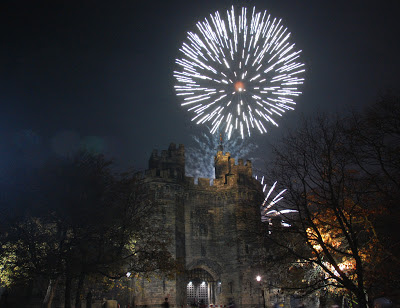 The countdown has begun for this year's Lancaster Firework Spectacular which will see this year’s dazzling display being launched – for the first time ever – from the roof of historic Lancaster Castle.

On Saturday 3rd November, the Duchy of Lancaster has given permission for this magnificent building to be the centrepiece of the pyrotechnics, moving the launch from its traditional spot on the nearby Vicarage Fields.

Not only will the castle act as the perfect backdrop for the drama of the display but the new location will also increase the height of the firework launch by up to 100 feet, and therefore increase the distance from which they can be seen.

As in previous years, the castle and priory precinct will be closed during the display which takes place at 8.00pm.

Viewing the display from the Giant Axe and Quay Meadow

Despite being what the Council described as a spectacular success in terms of visitor numbers last year, there was some criticism of the way the viewing areas were marshalled (see news story). In response, organisers have introduced a free wristband system for the two official viewing areas closest to the castle at Quay Meadow and Giant Axe.

Well over half of the wristbands allowing access to these sites having already been allocated, so you are advised to register for your wristbands now at www.lancaster.gov.uk/fireworks or call  01524 582906.

You can request up to six wristbands per household and these will be posted out ahead of the event.  The deadline for registration is 5.00pm on 24th October.

As well as a fantastic view of this year's display, spectators at the Giant Axe will also be able to enjoy a number of small fairground rides courtesy of Taylor's Funfair as well as live entertainment from Lancaster's very own samba band - Batala. Refreshments will also be available at this site.

BBC Radio Lancashire will be broadcasting live from Quay Meadow from 7pm with a special programme of co-ordinated music on 104.5FM. Visitors are invited to go along and meet Lancaster's very own breakfast show presenter and TV news broadcaster, Graham Liver, as well as other Radio Lancashire personalities. Refreshments and entertainment will also be available at this venue before the fireworks are launched.

Although the fireworks will be visible from almost anywhere in the city that can see the castle, there are three additional official viewing areas which do not require passes:

• Salt Ayre, where more than 2,500 people enjoyed the spectacular view across the River Lune last year. Visitors will also be able to enjoy free parking, hot food and drink and Taylor’s Funfair
• Millennium Bridge and the cycle path alongside the River Lune (opposite St George’s Quay)
• Williamson Park

Representatives from local charity CancerCare will also be in attendance this year at all official viewing areas to raise money to support people affected by cancer.

The Fireworks Spectacular is just the culmination of a weekend of activities in Lancaster.

The celebrations will start on Friday 2nd November with ‘Light Up Lancaster’, brought to you by arts partners from across the district. The event invites you to stroll through the squares and alleyways at the heart of Lancaster by night and celebrate its heritage through illuminating performances of music, art and dance.

As a warm up for the evening’s event on Saturday 3rd November, there will be witches and Guy Fawkes themed activities throughout the day in the city centre, including guided walks and tours, storytelling, arts and crafts and lantern making workshops.

• For more information on the viewing areas and a full programme of the weekend’s events, visit www.lancaster.gov.uk/fireworks
Posted by John Freeman at 14:56