In Review: Drawing on Much Ado 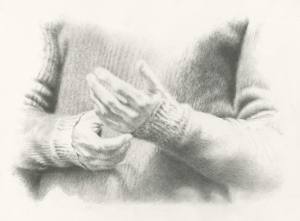 Drawing On Much Ado
Photographs and Drawings
by Kim Lewis, Cathy Duncan and George Coupe
displayed at the Dukes Gallery
15 to 27 October 2012.

This exhibition captures the atmosphere of the recent and outstandingly successful Demi-Paradise production of 'Much ado about Nothing', produced by Steve Tomlin and performed at Lancaster Castle and Priory Church earlier this year. The display comprises sketches and photographs of by Demi-paradise artists in residence Kim and Cathy, showing the initial readings and rehearsals of the play. Also displayed are production photographs by company photographer George Coupe. In presenting an exhibition of the play Demi-paradise is building on their relationship with the Dukes theatre.

Artist Kim Lewis succeeds in capturing elements of the play and relationship of characters with depiction of the expressive hand gestures of the actors. This display of her work is in the form of fifteen photographs collected into five sets, along with eight drawings. The photographs have a soft appearance and are virtually monochrome.  They form a record which enabled Kim to create the drawings using the medium of pencil. The drawings are very detailed and realistic though retaining the character, individuality and softness of a pencil sketch. Each drawing can take up to two weeks to produce. All these art works depict hands, along with part of a torso, the hands clasping, holding or engaged in some activity. This gives a very original and rather intimate method of capturing the actions of the actors and the progress of the play and its production. Kim is known for her success as author an illustrator of numerous children's books

An alternative take on the plays production is provided by artist Cathy Duncan  in the form of four frames of collected pen and ink sketches. Individual sketch are relatively small and each was completed in the space of ten minutes or less as the action unfolded. They show scenes from the rehearsals of the play and vary from a few lines capturing dancing figures to quite detailed sketches of actors in dialogue. This degree of time pressure has resulted in a set of very lively and spontaneous works of art which give a time line to the unfolding of the play. Cathy has exhibited her work throughout North East England and she develops her sketches into linecuts or paintings.

George Coupe is a freelance photographer who has worked with Demi-paradise on almost all of their productions to date. Four of his stunning colour production photographs provide a framework and another point of reference for the viewer.

The simultaneous presentation of three very different approaches by three artists of the same play allows the viewer to contrast these approaches and have three alternative yet complimentary viewpoints of the production.

This exhibition will obviously appeal to anyone who enjoyed the Demi-paradise production of 'Much ado about Nothing. However the work of each of these artists also stands on its own merit as a fine collection of original and skilled artwork.

It is intended that the exhibition itself will go on tour, the next venue likely to be The Theatre by the Lake in Keswick.

The Dukes Gallery, Moor Lane Lancaster, LA1 1QE, is open everyday from 10:00. Entrance is free. Please call the box office on 01524 598500 to check opening times if you’re making a special journey as occasionally the space is closed to the public.
www.dukes-lancaster.org
Posted by Unknown at 11:05