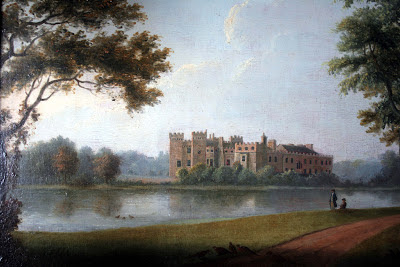 The Friends of Lancaster City Museum are holding an event at Ashton Hall Golf Club at 7.30 next Monday evening (26th November), at which a rare painting of Ashton Hall will be on display.

As well as being able to view the painting, people who attend the event will be able to listen to an illustrated talk by local historian Mike Derbyshire about the history of Ashton Hall.

Lancashire County Council's manager at Lancaster Museum, Heather Dowler, said: "The Friends have arranged this event to mark the purchasing of this magnificent painting by the museum.

"The museum recently acquired the rare painting of Ashton Hall thanks to the generous assistance of the Friends of the Museum. The painting dates to around 1810-20 and is believed to have been painted by George Cuitt Junior (1779-1854).

"The painting provides a rare example of what will have been the ‘must see’ view of the hall, showing a small lake which did not exist for long.

"The history of the Hall is also fascinating," she adds. "It has had a number of owners including the Duke of Hamilton and Lord Ashton. The original house probably dated to the early 17th century and was centred around the medieval tower that still remains. Much of the house was rebuilt in 1856 in the Gothic style, which was very popular at the time."

Ashton Hall, the ancient seat of the Lawrences, is located about three miles to the south of the town of Lancaster, in northern Lancashire. It is picturesquely situated, commanding fine views of the estuary of the River Lune, and of Morecambe Bay, an extensive inlet of the Irish Sea. Ashton Hall is noted for the sylvan beauty of its spacious park, which is well diversified with hill and vale. The mansion is a large edifice, with many of the characteristics of an ancient baronial castle, having a square tower at one end, and numerous battlements, turrets, and machiocolations. Successive alterations and additions have been made at different epochs, in harmony with the medieval type of architecture. The oldest portion is probably from the fourteenth century. The interior contains a fine baronial hall.

Mentioned in the Domesday Book, in 1066 Ashton was one of three manors of Cliber, Machern and Gillemicheld and appears to have been accessed of two plough-lands. (The other two manors, Ellel and Scotforth, retained their connection to Ashton being held by the Lancaster family.) Afterwards, it was granted to Count Rogers of Poitori and a little later formed part of the lordship held by the Lancaster family, being held by knight's service. In the time of Henry II (1154-1189) William de Lancaster I granted half a plough-land to Gilbert de Ashton to hold by service of half a mark yearly. The second moiety was shared or inherited by the families of Stableton and Metham, Thweng and Pedwarding, and appears to have been acquired by the Lawrence family of Lancaster.

In 1226, the Millfield at Ashton rendered 5 shillings a year to the king. In 1323, it was held by many free tenants, who in all paid 5 shillings. to the earl! Sounds like mark ups are nothing new, then...

• Ashton Hall in the Domesday Book
Posted by John Freeman at 12:39