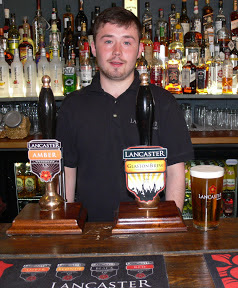 Final preparations are being made for the second annual Lancaster Glastonbrewery charity music festival at the Lancaster Brewhouse and Tap in aid of Bay Aqua Therapy on 18th May.

Local physiotherapist and festival organiser Zoe Hamilton said "preparations this year have been anything but smooth, Ben Fletcher from Cry Baby Aeroplanes has recently broken his arm and at one point we feared that they might not be able to play and both myself, my husband and my mum have all been in hospital in the last few weeks. But as they say - the show must go on".

The festival venue is provided by the Lancaster Brewhouse and Tap at Lancaster Leisure Park. In an effort to help drive ticket sales they have created a festival ale "Glaston Brew" which will be available at the venues that are selling tickets: the Brewery, the Sun Hotel and the Palatine in Morecambe. Tickets are also available from Pizza Margherita and the website www.glastonbrewery.org.uk.

Zoe went on to say "in terms of support from local businesses the response has again been tremendous. Recycling Lives are providing one of their lorry trailers so that it can be transformed into the festival stage, Website UK have created and developed a festival website, MPress Print have provided thousands of posters, flyers and wristbands for free and local businesses sponsoring adverts have covered the cost of the thousands of programmes that have been distributed across the district for people to pick up for free."

Alongside raising funds for Bay Aqua Therapy, the festival aims to provide local unsigned talent such as Fourth Time Lucky from More Music in Morecambe, Amy-Jo Clough, Joe McCorriston and Molly Warburton and the Shady Days, with a platform to hopefully springboard on to bigger and better things.

The line up will also include more established acts such as Ben Ruth and The Convulsions, James Geary and Stop Watch Wilson, as well as impressive local bands the Cry Baby Aeroplanes and Idol Minds and several up and coming bands from Manchester; The Ordinary, Mama Roux and Velocets.