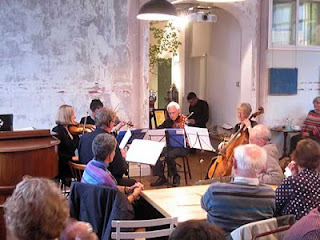 
It wasn’t supposed to be a concert but that is how it turned out. As a patron of the orchestra, I went along to support the joint venture between a small group of Haffner Orchestra players and Atkinsons at the latter’s latest venue ‘The Hall’ on China Street, Lancaster. Expecting to enjoy a slice of cake and a cup of coffee in the company of live musicians providing wall paper sound from a corner of the room, we were surprised to discover that the usual daytime patrons had been replaced by a room full of serious concert goers who had no intention of coming and going. They were there from the first note to the last one two hours later and extra seating had to be brought in to accommodate the unanticipated demand.

Lancaster is not short of live music venues but there was only one place to be Friday night if you wanted to hear acoustic classical instruments being played at close quarters to a very high standard, including a standard quartet of strings, an oboe and a piano. The musical selections were obviously chosen for an audience with eclectic tastes. We were treated to Chopin, Beethoven, Mozart, ragtime and tunes from the musicals. Moreover, the combinations of instruments were varied. Sometimes, the string quartet played without the others, sometimes they were joined by the oboe. Occasionally, the oboe combined with ‘cello and piano and more than once the pianist played alone.

It is impossible to single out any particular player as outstanding. They were all equally good and mostly had the opportunity to demonstrate their exceptional abilities. Only the viola player was denied equal opportunity but that is a fact of life for all viola players. Few composers have treated the instrument with the respect its players deserve.

There was one moment when you could have heard a pin drop. That was when the players had at last to concede that they were hopelessly lost and stopped playing. There followed some discrete whispering (“from letter H”) and all was once again well. It happens with the best of players and was a good reminder that the music was live and that despite their other-worldly skills, the players are still human!

These particular amateur musicians are drawn together by both a love of music and the opportunity to play with others of a similarly high technical standard. It is difficult to accept that they all have ‘day’ jobs, ranging from designing buildings, managing businesses, treating patients and raising families. When do they ever find the time to practise!

The evening was referred to as an experiment and I am sure the listeners are looking forward to version II in the near future. It is said that the entry charge will go toward funding a particularly prominent soloist’s particularly large professional fee during next season’s Haffner concert series. If that is true, everyone who attended is a double winner. For a measly £5, each got an immediate return of 2 hours of chamber music and the promise of another big return at a full Haffner concert next year.

The last in this year’s Haffner Orchestra concerts is at 7.30 pm on Saturday, 29th June in the Town Hall on Dalton Square. I shan’t be missing it for the world.

For more about the Haffner Orchestra and forthcoming concerts visit:
http://www.haffnerorchestra.org/

For more about J. Atkinson & Co and their Priory Hall project visit:
http://www.thecoffeehopper.com/