If you needed any reminding about the reasons trade unions and others have fought for the health and safety regulations the current government is trying to dismantle, then the story of a local worker who could have been killed when metal grating gave way under his feet at a tissue factory might give you pause for thought.

NTG Papermill, which makes toilet roll brands such as Sovereign and Cashmere and also has a plant in Middleton, was prosecuted by the Health and Safety Executive this week following an incident at its factory on the Lansil Industrial Estate on 24th August 2009.

Lancaster Magistrates’ Court heard the 39-year-old from Lancaster had been helping to hose down machinery during a two-week shutdown at the factory when he tried to cross the mezzanine floor, six metres above the ground.

As he stepped onto it, the metal grating gave way and his arms and jaw hit the floor as he fell and he managed to pull himself up. The worker, who has asked not to be named, suffered bruising and friction burns to his chest and along his arms. He also bruised his jaw.

A HSE investigation found the company did not have a suitable inspection and maintenance regime for checking the floor at the factory, despite it being in a humid area and at risk of becoming unstable due to rust.

The company was fined £10,000 after pleading guilty to a breach of the Workplace (Health, Safety and Welfare) Regulations 1992 by failing to properly maintain the mezzanine floor. The company was also ordered to pay £5,866 in prosecution costs.

“The employee at NTG was lucky he was able to grab onto the mezzanine floor as he fell", said HSE Inspector Anthony Banks after the hearing. "If he had fallen all the way to the concrete below then he could have been killed.

“The incident happened in a very humid area of the factory and the company should have done more to make sure metal grates which make up the walkway didn’t become unsafe.

“Companies shouldn’t just wait for employees to be injured before taking any action to improve safety. It’s vital that proper maintenance systems are in place to protect workers.”

NTG is a major local employer. In 2011, its retail store on Caton Road was opened by local MP Eric Ollerenshaw.

The company has a strongly-worded statement about its health and statement policy on its web site.

"NTG Ltd recognizes the importance of Health and Safety issues and their contribution to business performance. No Management Responsibility has a Higher Priority Than The Safety & Health of their Employees." 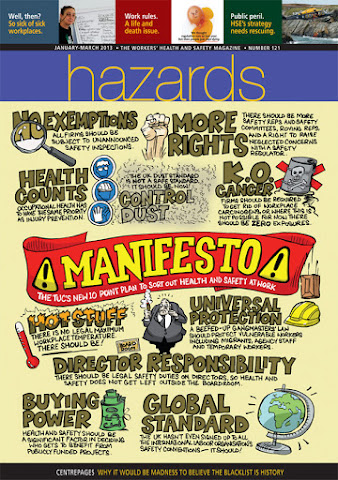 Health and Safety: Cause for Concern?

On average, 30 workers are killed while at work in the manufacturing industry in Great Britain every year, making up a quarter of all workplace deaths.

Despite this shocking record, from last month new rules on both the Health & Safety Executive and local authorities now exempt hundreds of thousands of businesses - such as shops, offices, pubs and clubs - from regular safety inspections.

Firms will only face health and safety inspections if they are operating in higher-risk areas such as construction, or if they have an incident or track record of poor performance.

The changes to health and safety procedures have the backing of business groups such as the British Chambers of Commerce and manufacturers’ organisation, the EEF, but are opposed by trade unions and safety groups, with the Trade Union Congress warning that the decision could put the health of UK employees at risk.

“Some of the ‘low risk’ workplaces identified by the government, such as shops, actually experience high levels of workplace injuries,” explained the TUC’s general secretary, Brendan Barber when the changes were announced last year. “This will only get worse if employers find it easier to ignore safety risks.

“Health and safety regulation is not a burden on business, it is a basic protection for workers,” he continued. “Cutting back on regulation and inspections will lead to more injuries and deaths as a result of poor safety at work."

The TUC recently released its own Health and Safety starter for 10 Manifesto, arguing against many of the changes.

Spending cuts are also taking their toll on safety inspections. By 2014 the HSE will have had to reduce its budget by approximately £80–85m a year, which, according to the All-Party Parliamentary Group on Occupational Safety and Health, cannot be achieved by administrative savings and increased charging alone, which will leave the remainder to be met through cuts to the service it provides.

The All-Party Parliamentary Group on Occupational Safety and Health believes that cuts in prevention are a false economy and any reduction in HSE activities will lead to increased costs from sickness absence, compensation and benefit costs.

The government argues that good health and safety is important, but believes the burden of excessive health and safety rules and regulations on business has become too great and a damaging compensation culture is stifling innovation and growth.

They claim they want to protect people in the workplace while reducing the burden of unnecessary health and safety rules and regulations on businesses.

"We want to take a lighter touch approach to health and safety at work, concentrating efforts on higher risk industries and serious breaches of the rules."

Health and safety expert Bibby Consulting & Support criticised the cuts as a further reduction in support for small businesses. It argues that environmental health officer checks helped small businesses to identify and resolve minor breaches before they became serious. The removal of these inspections, it says, potentially exposes small businesses to heavier penalties in the event of an accident, and means less guidance will be offered by the HSE.

• Information on improving safety is available at www.hse.gov.uk/manufacturing

• UNISON's 2011 statement on cuts in health and safety