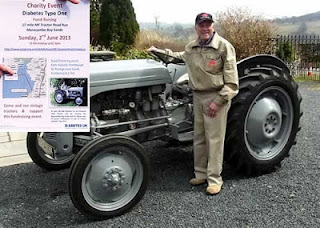 The first ever convoy of vintage Massey Ferguson tractors will (we hope!) cross the hazardous sands of Morecambe Bay, between Cumbria and Lancashire, to raise money for Diabetes UK on Sunday, 2 June 2013.

He said:  “A similar crossing was successfully undertaken by Land Rovers some years ago, but this would be the first time such a crossing will be undertaken by tractors. Massey Ferguson is a massive part of Cumbria’s heritage, the tractors were enormously popular from the 1950s onwards, and are still in use today, plus Massey Ferguson is part of my own, personal history, I worked for the company for over 40 years.

“I know that Diabetes UK has a strong track record in supporting life-changing research and I felt strongly that I wanted to raise money for the charity after seeing the impact that diabetes has had on family and friend’s lives.”

Money raised from the convoy will go to a Diabetes UK, Type 1 diabetes research project conducted by Kings College, London.

Kate McKie, Diabetes UK, Regional Fundraising Manager North West, said: “This is such an inspiring initiative from Mr Dickman to raise much needed money for research into Type 1 diabetes. I think this will be a very memorable day for anyone who takes part or goes along to watch the convoy cross the notorious sands of Morecambe Bay.”

At low tide, which occurs at 1.45pm on the 2 June, Morecambe Bay exposes 120sq miles of sand flats, and the Bay, which cuts into the North West coastline, is the largest continual intertidal area of Britain and is fed by five fresh water rivers.

Steve Morris, organiser of the Flookburgh Steam Gathering, who lives with Type 1 diabetes and is a key organiser in the tractor convoy, worked closely with Alan Sledmore, and two other official Morecambe Bay guides, to ensure the safest route across the bay and pinpoint the best time and date, according to the Bay’s tides and sand conditions.

The guided crossing, which will start and finish at Cark Airfield (see map), near Flookburgh is to set off at 12 noon and head south east across the Bay to Hest Bank, a return journey of about 18 miles. The return crossing  is expected to take three to four hours, with the tractors driving  through the River Kent, which will be knee deep at low tide and one of the most hazardous parts of the crossing.

Anyone interested in sponsoring or watching the event can find more details at: www.justgiving.com/bobdickmanMF-fergusontractorroadrun, or contact Mr Dickman on 01931 713106, or email, bobdickman@btinternet.com.

Further information on Diabetes UK research can be found at: www.diabetes.org.uk/Research.

For the more pedestrian among us, there will also be a Cross Bay Walk in aid of Diabetes UK, led by experienced Guide Alan Sledmore, from Hest Bank to Flookburgh on Sunday 30 June. For more information see our calendar listing for this event.