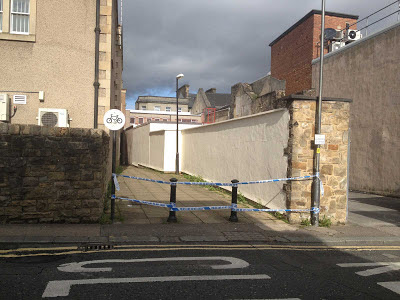 Police are appealing for information after a 19 year old student had his wallet and phone stolen after using a cash point in Lancaster.

The robbery took place just after midnight on Thursday 17th May 2013, when the victim withdrew £30 cash from the Halifax cash machine on Penny Street - and was then attacked by two men in the alley next to the bank.

The victim was overpowered and his mobile telephone and wallet stolen.

The first offender who initiated the attack is described as being white, aged between 19 and 20, 5ft 10inches tall with short dark hair and was wearing a black shirt with stocky build.

DC Jennie Pinder from Lancaster CID said: “I would appeal to anybody that witnessed this incident or with any information that could assist with our investigation to come forward and call Lancashire Police on 101 quoting log reference LC-20130516-0015.

“Fortunately the man was not injured but he was left badly shaken up.”

The victim’s wallet is described as being black with orange polka dots; it had an elastic strap which was orange with black polka dots.

His mobile phone is a black Hawaii Ascend with a black front and a metallic back cover.

• People with information can also contact the independent charity Crimestoppers anonymously on 0800 555 111 or on-line at Crimestoppers-uk.org. No personal details are taken, information is not traced or recorded and you will not go to court.
Posted by John Freeman at 11:05