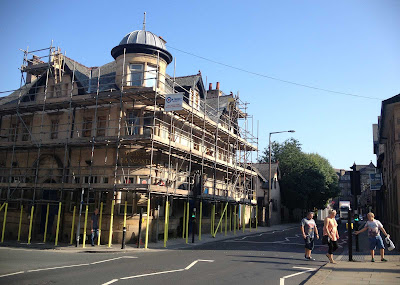 Lancaster City Council has called a halt to conversion work on the former Duke of Lancaster public house after the Lancaster-based company involved failed to secure planning permission before it began its refit.

The Council began a planning enforcement investigation after it became clear that Mister Capital Holdings, based in St. Leonards Gate, had begun work converting the former Duke of Lancaster public house on China Street into flats.

A search of the Council's Planning Applications portal indicates no planning application had been made - and indeed that the last application for any work on the property dates back to its time as a pub.

Mister Capital Holdings Limited, whose owners have connections with other Lancaster-based businesses such as Logicalc and the Nice and Spicy takeaway, purchased the former pub earlier this year for £250,000.

Work subsequently began on converting the building but on 4th July, Lancaster City Council applied for, and was successful in obtaining, an interim Injunction forbidding the owners from carrying out works without obtaining the Local Planning Authority’s written consent or Listed Building Consent.

On the 8th July the matter again went before the Court where the owner’s Director gave an undertaking to the Court that no further work will take place save for repairs to the roof consisting of a like for like replacement of roof slates; repainting of external rough cast render in colour(s) to match the existing, and internal painting of the walls, ceiling and woodwork;  installation of kitchen units and bathroom fittings and installation of carpets or other floor coverings.

"The case is ongoing and it would not be appropriate for the council to comment further on the matter," a Council spokesperson told virtual-lancaster. 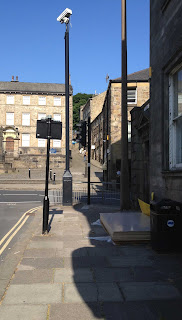 Although the court order demands that most work has been stopped, some workers are still in the building and a member of the virtual-lancaster was disturbed to witness a builder sweeping debris from off the highest level of the scaffolding surrounding the former pub, directly onto the street below last night.

As our picture shows, there is no fencing around the scaffolding and members of the ublic could easily have been hit by debris.

We have been unable to contact a representative of Mister Capital Holdings for comment but are happy to post any response they may have to our story.

A commitment to undertake no further work - other than fitting out kitchens, bathrooms and carpeting the flats. And the Council accepted that ?
Of course, is the same planners who discovered an urgent need to build on greenbelt land because of a shortage of building land and an large increase in demand.
The 'shortage' is the result of owners of industrial land deciding not to build under present circumstances. The 'increase in demand' is from "hidden households" who can neither afford to rent or buy and a demand from the elderly who 'might' want smaller houses in 15 years time.

The owners seem to have a fairly cavalier attitude to things like rules and obligations. E.g. Zubeir Mista is listed as a Director of 12 companies.

The majority are dissolved. However

Finally there have been three attempts to strike off LogicalC, two of which have been suspended.