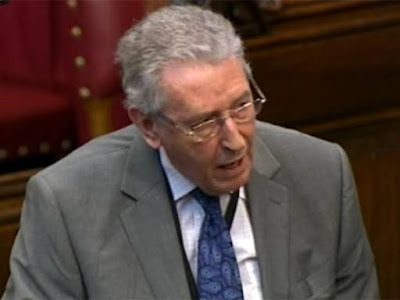 (Updated 18:10, added Gordon Marsden, Labour MP's response): Tory Lord David Howell - Chancellor George Osborne's father-in-law - has apologized for confusing the North East for the North West when he suggested fracking should take place in the "desolate North" rather than the South of England.

Earlier this week, during a Lord debate, Lord Howell of Guildford recommended that the search for shale gas deposits in Britain should not be allowed to tarnish “beautiful rural areas” but be confined to “large, uninhabited and desolate” areas, specifically the North East.

"My Lords, does the Minister accept that it could be a mistake to discuss fracking in terms of the whole of the United Kingdom in one go?" he said. "Obviously, in beautiful rural areas there are worries not just about drilling and fracking — which I think are exaggerated—but about trucks, deliveries, roads and disturbance, which are quite justified.

"However, there are large, uninhabited and desolate areas, certainly in parts of the north-east, where there is plenty of room for fracking, well away from anybody’s residence, and where it could be conducted without any threat to the rural environment.

"Does the Minister agree that a distinction should be made between one area and another rather than lumping them together...?"

Having already outraged and re-opened the fabled North-South divide with his assinine comments, Lord Howell has now exacerbated the furore he's caused with an apology that has infuriated many, including BBC Radio Lancashire's Graham Liver.

“What was in my mind was much more the drilling going on off the Lancashire coast,” the lord, who served as energy secretary in Margaret Thatcher’s first Cabinet, explained to the Daily Telegraph. “But it came out of my mouth as the North East, which you can blame me for rightly. And that has created a great furore.”

"Lord Howell says it was a stupid error – a simple mix-up between East and West…but is anywhere in Lancashire actually 'unloved'?" challenged Mr Liver. "It seems an odd choice of word… we Lancastrians are proud of the whole county, aren’t we? Is Lord Howell right to suggest there are corners of Lancashire which we don’t care about…and if so, should we frack the heck out of it? Or, is the noble Lord hopelessly out of touch with the North of the country?

"Perhaps we should invite him up for the weekend, so he can admire the beauty of the county…"

We might have a while to wait for Mr Howell to take up any offer to visit - he's off on his holidays to France and Cornwall, well away from the North.

“Lord Howell’s comments are outrageous. First he slurred the North East and now it seems he confused it with the North West," said Gordon Marsden, Labour MP for Blackpool South. “The North West is neither ‘desolate’ nor ‘unloved’.

“It just goes to show that the Tories are utterly out-of-touch.”

As well as noting his equally fatuous comments about carbon dioxide emissions from volcanoes, the Daily Telegraph reports that Lord Howell treats with resignation the storm he has aroused, accepting it as an example of the volatility that accompanies politics in the internet age.

“Twitter does allow instant opinions to be uttered, which is not necessarily good… Public opinion can swing around and people in government have to develop steadiness in the face of it. It’s like sailing in a much more gusty, dangerous wind.”

Perhaps he shiould sail off into retirement.