Ian McNabb of 'The Icicle Works' to revisit the Yorkie 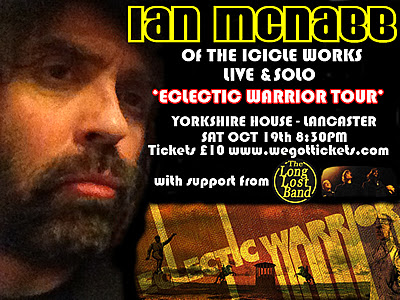 Legendary Liverpool singer-songwriter and former frontman of  The Icicle Works Ian McNabb will be bringing his electric – acoustic tour to the Yorkshire House in Lancaster at 8:30pm on Saturday 19 October 2013, performing tracks from his latest release ‘Eclectic Warrior’ in addition to songs from his solo career and Icicle Works days.

Ian McNabb has been acclaimed as one of the finest singer-songwriters Britain has produced, emerging from the 1980’s Liverpool music scene as songwriter, lead singer and guitar player with The Icicle Works.  Their initial run of hit singles  (Love Is A Wonderful Colour, Birds Fly, When It All Comes Down, Evangeline, Understanding Jane, Little Girl Lost) has been followed by a distinguished solo career, including a Mercury Prize Nomination for the 1994 album ‘Head Like A Rock’ which was recorded with Neil Young’s band ‘Crazy Horse’. You can find his discography at www.ianmcnabb.com and many, many videos on youtube. For those who like a lot of facts with their sounds there are plenty on his wikipedia page too.

But it's being there and live that makes the experience. Now in his third decade as a recording artist, Ian continues to write stunning songs with warmth, humour, cynicism and grandeur and continues to tour his unique electric–acoustic show to packed venues around the country. His exceptional 2012 show at the Yorkshire House sold out with a very appreciative crowd as did his entire UK tour celebrating the 30th anniversary of The Icicle Works.

Local favorites The Long Lost Band will be supporting Ian for the 4th time now. Those who have heard their excellent first album 'The Big Light Secret’ will be looking forward to their second, due out later this year. (See http://www.thelonglostband.com/).

Tickets for the Yorkshire House gig on Saturday 19 October 2013 cost £10 and are available in advance (plus £1 bf) from www.ianmcnabb.com.

The sweetest guy in rock ‘n’ roll – a legend as far as I’m concerned – Alan McGee (Creation Records founder)
‘A pure energy musician’ – Billy Talbot (Crazy Horse)
‘He’s A Genius’ – Q Magazine
‘One of the best songwriters the city has ever produced’ – Stuart Maconie
Posted by Chris Satori at 10:55