Lancaster ranked as one of England's most vibrant cities 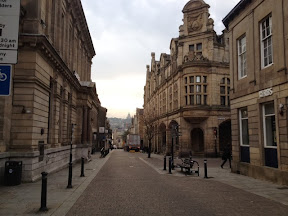 Do you feel it? Are Lancaster's streets tingling for you?

Because, apparently, they should be - as the town has been named one of the most exciting places in the country to live and work.

Good news for those of us fearing we were heading for a pasting like the one Burnley got from the Economist this week, then, with the magazine suggesting the government should give up backing small cities in favour of large ones - and that everyone might be better off living cities like in Liverpool or Manchester in the North West.

Lancaster is clearly doing much better than Burnley, rated eighth in a new list of England’s most vibrant urban areas, put together by information services company Experian.

It is one of only three northern cities ranked in the top 10, the others being Manchester (which tops the list) and Leeds (fifth).

Experian compiled the list by analysing and comparing 2001 and 2011 Census data, ranking each of the centres on eight key characteristics covering the housing type, tenure, economic activity and the professional status of the population.

Councillor Janice Hanson, Cabinet member with responsibility for economic regeneration, said: “These results are good news and consistent with recent evidence the council has commissioned to assist with its new Local Plan.

“To support and continue this vibrancy what the council now needs to do is take action to maintain a healthy working population.

“This means taking action to address our housing needs and retaining skills both from graduates at the district’s own universities and encouraging the return of some of our young people from other higher education institutions in larger cities. All of these issues are addressed in the forthcoming Local Plan."