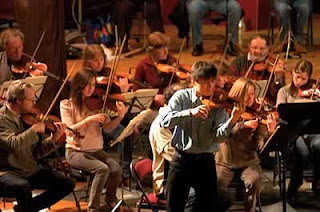 I used to play a game of judging which Haffner programme item had received the most rehearsal time. Years ago it was an easy game to win but now I can no longer tell. At least one other patron will agree. He has attended this amateur orchestra’s concerts from the beginning and declared publicly on Saturday night that its transformation since the early days in the Princess Margaretha Hall is truly remarkable.

As the evening’s guest conductor Justin Doyle said at the pre-concert talk, a traditional orchestral programme comprises “meat and two veg” (an overture, a concerto and a symphony). Saturday’s programme, in a sense, omitted the main course and moved straight to the desserts trolley, for we were allowed to savour three of the richest selections from the orchestral repertoire. It must have been particularly attractive to many in the audience because the Great Hall was full. I have never before seen it so packed.

As usual, the pre-concert talk was great value for money, costing as it did nothing. Mr Doyle gave a light-hearted lecture on the development of Western music from the early sacred music of Palestrina and secular music of the troubadours to the Classical symphony. Musical style followed the money. The Church provided a steady income to some composers while others worked in the service of the wealthy, who loved to entertain their guests with something new. The secular dances became musical forms for defining the structures of instrumental pieces and while Brahms was writing symphonies and concertos, Wagner was at the same time writing pieces in which instrumental themes were being accompanied, Baroque style, by voices telling a story rather than always the other way round. All good stuff and, I think, lapped up by the audience, which was perhaps three times the size of any pre-concert talk audience in my experience. Not sure why the attendance was so high but it was good to see nonetheless.

The first selection from the sweets trolley was Bizet’s Carmen Suite. It suited the orchestra to begin with the boisterous Overture and to press on into the Aragonaise without a break. No time for nerves to catch hold. Indeed the first chord was struck, unusually, the very moment the conductor’s foot touched the platform. The Aragonaise and Les Dragons d’Alcala in particular gave the excellent Haffner woodwinds a much deserved showcase for their skills. It was also a pleasure to see performers being allowed to get on with playing together without a stick being waved in their faces.

Second on the menu was the amazing Firebird. The ballet was first performed in Paris in 1910 where it attracted bravos and boos in equal intensity, so revolutionary was it in its time. The piece beautifully illustrates the comment in the pre-concert talk that although one cannot have melody without rhythm, the reverse is certainly possible. Many of the thrills in the Firebird are derived from Stravinsky’s complex rhythms, the successful performance of which depended on the delivery of a secure beat from the rostrum.

Before the beginning of the Firebird, the conductor called for a quick retune. I had not noticed any intonation problems and wondered whether this might be simply a clever approach to calming the players by keeping them busy between pieces. If so, it was certainly successful. With only a little lack of attention to the accuracy of pitch and rhythm, the low chromaticism of the opening bars could have degenerated into a muddy mess. In the event, it came off very well.

Nerves are the biggest liability for any amateur performers. There were just a few of those at the start of the largest cake, Dvořák’s Ninth Symphony, but once the introduction was out of the way and the first subject of the opening movement was in full gallop, the remainder of the concert went beautifully. I was particularly captivated by the magical playing in the middle section of the second movement and loved the Scherzo, which I thought was executed superbly despite its difficulty. I was also enchanted and moved by the perfect rendition of the last two low-string chords of the Largo.

Finally, the Finale. The last movement of the Dvořák is tailor made for amateur orchestras. Packed with tunes and big sounds with lots and lots of full ensemble playing. The Haffner made the most of it and at the end there was a real sense of elation in the hall, both offstage and on. Everybody went home feeling good and making a mental note to check the date of the next Haffner concert in February.