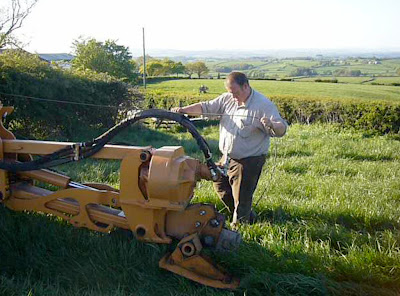 Volunteers working to bring a high speed broadband project to rural Lancashire have rallied to keep the project on course after a robbery of vital equipment needed to lay cables.

On the night pf 4th December 2013, equipment was stolen from a locked trailer belonging to the Broadband for the Rural North community broadband project. The trailer was parked at Fleets Farm, Gressingham near Lancaster as work was being carried out in that area.

Thieves cut the padlock and took a number of items including a compressor, a generator, a transformer and a fibre optic cable blowing machine. The police were called the following morning and are dealing with the matter.

(Planet equipment seems to be flavour of the month for thieves - we've heard the M6 Link site at Halton has also been targetted).

B4RN is fully insured for all operatives and equipment, however the theft of this equipment was likely to cause delays to work whilst replacements were sourced. B4RN volunteers are making a real push to get as many people as possible connected before Christmas so this was a particularly disheartening blow.

Fortunately these delays have been eliminated as the community have pulled together in response and loaned money to B4RN so the equipment can be replaced quickly. In addition, one of B4RN’s main suppliers, Emtelle, have supplied replacement equipment on a loan basis. This will allow work to continue as planned which will ensure the community, which desperately needs the connectivity, receives it with the minimum of delay.

Clearly this is a disappointment to the B4RN community. However in the spirit they have already demonstrated in providing one of the most rural parts of the UK with one of the fastest connections in the world, they have shown great resilience and once again pulled together robustly in support of their project because they are determined that this will not be a setback.

The B4RN community asks that if anyone has information on this theft then please contact PC Ben Hanley PC3962 at Lancaster Police Station on 01524 596608 quoting Crime Reference BA1303993.