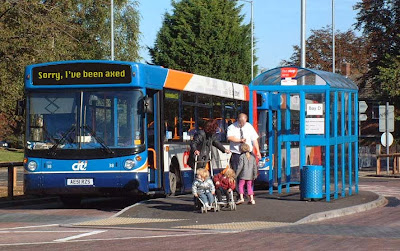 As we reported earlier, Lancashire's Labour-led County Council is "consulting" on cuts to night bus service subsidies, arguing it has to find £300 million in savings from its budget. The proposal has been condemned by Conservatives (even though it could be argue that it's their government's funding cuts that have prompted the Council's action), the Green Party and many local residents who will be affected if the bus services are axed.

The proposed cuts would seem to run counter to the national Labour Party's previous statements condemning both bus deregulation and funding cuts for bus services, arguing in 2012 that local bus service cuts have greatest impact on older people, teenagers and those on low incomes.

Challenged on the proposals, one Labour councillor - Carl Crompton, who represents the Preston University ward - appeared to agree on Twitter that the cuts were unwelcome:


@johnfreeman_dtb so I'm I being a regular user of public transport for evening meetings and evening socialising.
— Cllr Carl Crompton (@2012GuildMayor) January 12, 2014


Sadly, despite using some of the very services that will be cut, and arguments that the cuts are a false economy (adding to traffic congestion and isolating communities), Councillor Crompton at present seems content to follow the Party line and favour axing the services:

@johnfreeman_dtb sorry to have to say yes I will be supporting the cuts, LCC have to make £300million in savings over the next 3years
— Cllr Carl Crompton (@2012GuildMayor) January 13, 2014


@johnfreeman_dtb we sometimes have to make decisions that we don't like, why pay subsidy's to bus company's that are making large profits??
— Cllr Carl Crompton (@2012GuildMayor) January 14, 2014


,br/>How times change. In March 2012, the Labour Party was chastising the government about bus services nationally, arguing the Government should admit that bus deregulation has failed and the rest of the country needs London-style powers.

"It’s time that passengers across England were able to benefit from a properly managed, integrated transport network with smart ticketing and regulated fares on local bus and rail services," said the then Shadow Transport Secretary Maria Eagle.

In September 2012 she was at it again, arguing local bus service cuts have greatest impact on older people, teenagers and those on low incomes.

"The Government’s decision to cut funding for vital local bus services too far and too fast shows just how out of touch Ministers are with the day to day lives of millions of people up and down the country," she said.

"Ministers should listen to their own consumer watchdog, Passenger Focus, which has warned that those most affected by the loss of a local bus service are older people, teenagers, those on lower incomes and those with health issues. With one in five supported bus services now at risk, these cuts have left older people isolated, young people unable to access college courses and made it harder for those unemployed to get back into work."

In September 2013, the Labour Party also set out proposals for the most wide and far-reaching reform of public transport in since the privatisation of the bus and rail industries in the 1980s and 1990s. Their proposals include making it easier for English local authorities to reverse the deregulation of local bus services, and enabling them to set up their own local bus companies; and raising fuel tax for England’s bus operators and passing the extra revenues to local authorities.

Let's hope there are some bus services left if they get elected for them to do this...

This is a direct consequence of choices the Government made to reduce central funding to the county councils countrywide.
It is very undesirable for all the reasons given above by locals, experts and politicians. I cannot imagine anyone thinks it desirable, possibly excepting taxi companies!