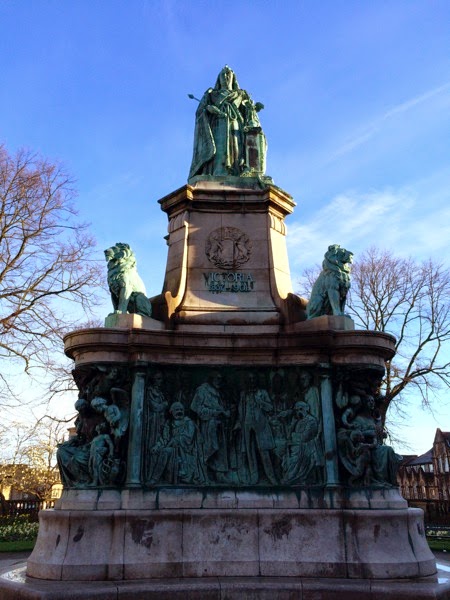 Lancaster City Council is looking at ways to restore the listed Queen Victoria memorial in Dalton Square to its former glory - but is conscious that at a time of cuts to vital services, they have to look assess the costs very carefully, which run into thousands of pounds.

While the donor of the statue, Lord Ashton, is these days considered by some to have a dubious relationship with the city where he made his fortune, the statue, which he donated to the city in 1906 is a fascinating snapshot of Victorian Britain. The work of Herbert Hampton in Portland stone ashlar with bronze reliefs and statuary, it features a wide range of eminent Victorians, including inventors, politicians and creators. (But, apart from Victoria herself only two women, Florence Nightingale and George Elliot). 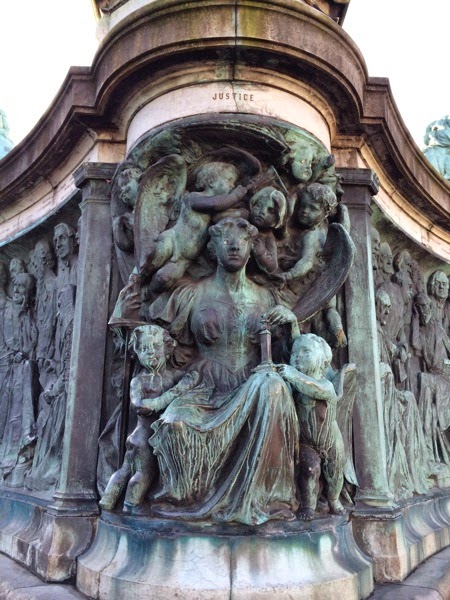 Sadly, the statue has been the target of graffiti artists and council staff and councillors agree it is in a poor state and after the Council has contacted English Heritage about the poor condition of the grade II listed memorial, it was added to the Buildings at Risk register in 2012.


As well as the graffiti, the bronze on the statue is corroding (which gives it a green patina) and the stonework suffers from staining.

"Recent graffiti removal is not effective and has left stains on the stonework," says Stephen Gardner, the council's Senior Conservation Officer in the Regeneration & Planning Service Department, in email discussion following my contact with Councillor Ron Sands.

Some solutions have been proposed by the Local Authority and agreed by English Heritage, but the question of cost at a time of cutbacks weighs heavily on officials and councillors.

"The deteriorating condition of the memorial is a serious concern" says Stephen Gardner, "[But] this may not be a priority in a time of austerity."

The last condition survey of the memorial was carried out for Property Services by Acanthus Clews Conservation architects as part of the Municipal Buildings Works programme in 2011. In total, not including the cleaning of the stone work, it was estimated that taking into account the delicate nature of the restoration, scaffolding and other costs would be at least £14,000. 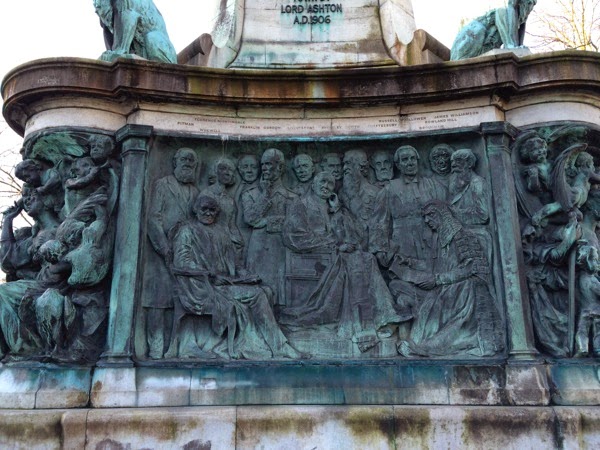 The major issue and cost with the restoration is the restoration of the memorial's bronze - in particular, the removal of the green corrosion. Some parties would have views as much as they would argue this is stable and part of its intrinsic value, while others argue re-patinating over such deep-set corrosion would be similar to painting over rust.

Because of this, Bronze Restorations, the London-based specialist restoration company approached to consider the problem, suggested the use of calcite, which would enables them to remove the layers of corrosion without unacceptable metal loss – but the cost would run to £20,000 at 2011 prices. 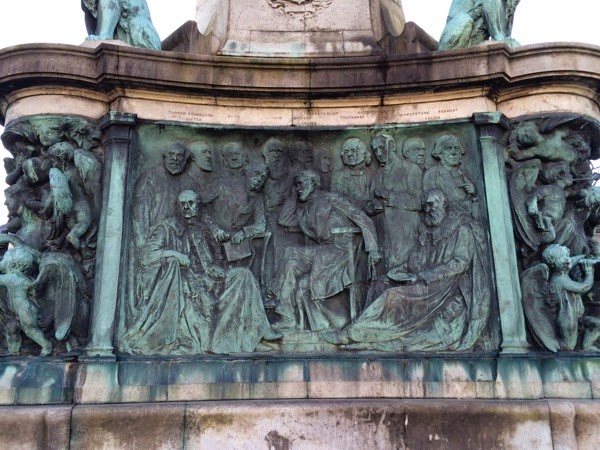 Given the potential costs, it's easy to see why the City Council is reluctant to commit to the Memorial's restoration, despite the Square being a regular destination for tourists. But where possible, the Council has been busy making good other listed locations, including the War Memorial garden beside Lancaster Town Hall. The railings and gates were repainted and redecorated after years of neglect and the grade II listed war memorial (designed by Thomas Hayton Mawson) has recently been cleaned and the sandstone masonry repointed. Ivy growth covering part of the grade II listed balustrade walls to the memorial garden has also been removed and recent works to the gardens have also made a significant improvement to the setting of the memorial.

"We do have a rapid action anti graffiti team for our own properties and an anti graffiti team for any offensive graffiti on any property, regardless of ownership," says Councillor Sands. "Despite all the cutbacks... we do still have access to funds for such work as this which has a high priority because of our commitment to maintaining the civic dignity- heritage of our townscape.

Given that the Queen Victoria Memorial was donated by a private member of the Lancaster community back in 1906, perhaps the community might consider backing a public appeal for its restoration? It's a question I put to Councillor Sands, suggesting the Council investigate social funding options such as a Kickstarter campaign, for example.

"We will certainly be interested in investigation the other funding avenues you mention," he told me.

Let's hope that, four years on from the last quotation, some action might be taken to spruce up this major Lancaster landmark soon.
Posted by John Freeman at 09:53