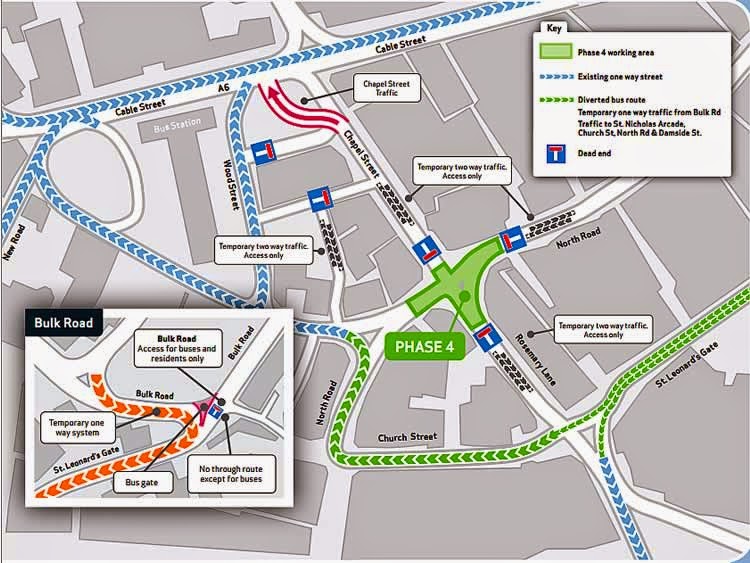 (Updated 16/9/14): As local drivers may have noticed, United Utilities have today moved into Phase 4 of their upgrade of the local sewer system, which involves closing part of North Road from the car park facing Marco's Restaurant to the Friary pub in the north-east corner of the one-way system, and diverting traffic along Bulk Road and St Leonardgate.

You can download a map and explanation of the road changes here.

The bad news  is that North Road will remain closed for two months from today.

City centre traffic ground to a halt today, on the first day of closures with traffic inching along Cable Street, Parliament Street and Bulk Road and backed up around the one-way system, across Skerton Bridge and for about a mile coming in on Caton Road, giving drivers ample opportunity to admire the new green-coloured signs declaring that Lancaster is open as usual for business.

Part of the problem was the lack of warning signage along the route and along other affected tributary roads, which meant that drivers are not apprised of road layout changes and have little way of working out where they needed to go along the diversion to arrive at their destination - resulting in a stream of traffic re-entering North Road and having to be re-diverted through the car park for another circuit around the diversion.

Although some notice was given in the Lancaster Guardian, it is not clear why warnings about the severity of the disruption were not posted along the actual roads due to be affected in the month prior to the works, which is the standard and most direct means of communicating with the drivers regularly using these routes. Posting signs saying that the city is "Open for business" is somewhat missing the point.

There is still no indication when approaching Lancaster city centre that the northern end of the city is gridlocked and so drivers are not offered the opportunity to select alternative routes.

However, all businesses are indeed still open as usual, so please continue to support them.

Here's a rundown of the temporary road changes (please refer to map above):

Some bus services are currently unable to serve Lancaster bus station and are operating instead from Dalton Square or Common Garden Street.  There will also be some temporary timetable changes to allow extra time for diversions and congestion. Information and new timetables are available from the Tourist Information Centre, the Bus Station Travel Shop or phone 0871 200 22 33. You can also download an overview of the temporary bus terminus plan here.

Pedestrians can still use the footpaths around the working area.

The good news is that the traffic that does eventually manage to reach the Greyhound Bridge is moving very freely there and along Morecambe Road towards Morecambe for the first time in years.
Posted by Chris Satori at 19:26