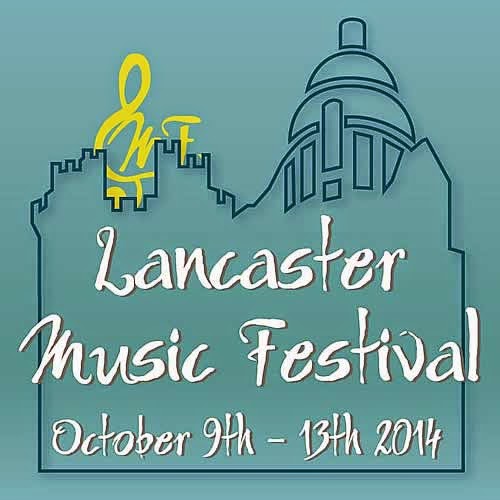 With 44 locations (including Lancaster Castle), over 160 acts and 200 music performances over five days, Lancaster Music Festival is preparing for what might be Lancaster’s busiest weekend ever (last year's was). Festival organisers have declared it an 'unofficial Bank Holiday weekend' ("Just take Monday off!"), starting early on Thursday 9 October and finishing at 1am on Tuesday 14 October.

The award winning free festival’s line-up is finally confirmed and you can check out the full schedule at http://www.lancastermusicfestival.com/. It's bursting with acts from blues, rock, folk, indie, EDM, funk, soul to samba, brass bands, vaudeville, classical and choral.  There will be acts from around the UK including 2014 Open Mic UK winner and BBC Introducing pick Heidi Browne; Southampton acoustic duo Eagle & Weeks; Manchester’s one man band genius Paddy Steer and another Mancunian with seriously fast fingers, Franco and the Dreadnought to name just a few.

The festival’s international programme will again feature Viennese songbird Marina Zettl (her 3rd year at the festival); a Vienna newcomer with Armenian fire, Ozlem Bulut; a Swedish neo-folk band with the deceptively descriptive sobriquet of Gibrish; a bombshell of a west coast rock and roller top 40 in the form of the racy Lacy Younger; soul sensation Andria Simone from Toronto (who will also close the festival on Monday night); deliciously deft modern jazz from Tel Aviv’s Shalosh; Ghanaian drum and chant from Kakatsitsi and the blistering funk rock of New Jersey power trio Sensory Hoverload.

I could carry on (and many will), it's a shockingly great line-up. Lancaster pulls its weight musically too and local favourites will be making a rich contribution - such as the highly irreverent, edgy country of Lumberjack Cowboy Heartbreak Trucking Company; blistering indie with Carpe and Lake Komo; samba act Batala; 60’s Hammond groove with Get Carter; classical ensembles from players from the Haffner Orchestra and the nationally known pop act Lovely Eggs.

To top it off, the festival is actually free and all the city venues are within easy walking distance of each other while a regular bus service connects with Lancaster University.

This year also welcomes some new venues including at least one bank (incidentally, the banks will be open during the “unofficial bank holiday weekend”), a music shop, two additional outdoor squares including the newly installed Square Stage in Market Square, a wine and beer shop, a horse drawn beer wagon, and of course Lancaster Castle.

For the first time in 1000 years Lancaster Castle will be hosting live bands with 23 concerts over the three days, including Heidi Browne ('Can’t wait to play, blimmin’ love castles I do!”). Entry to the Castle is a nominal £1.

Only one venue is ticketed for nationally known acts and the fees are nominal even there.

The festival will also host street theatre, mini ale festivals and plenty of food both in the venues and the market stalls. There will also be a Busking Booth and open mic events for 'off-programme' performers. The event is family friendly during the day and evening with adults being able to enjoy live music through the wee hours with at least one venue open 24 hours and another two licensed to 4am.

The festival not only has its own ale (by Thwaites) but also its own coffee (by Atkinsons) and it now has its own T-shirt, which you can obtain for a mere £10 from participating venues.

The 64 page festival brochure produced is available now in the participating venues and Lancaster and Morecambe Visitor Information Centres and costs just £1. Throughout the festival there will also be an information booth in Market Square.

Here are the handy festival links: