Health campaigners from the campaign group called No Health Sell-Off at Morecambe Bay are astonished by Morecambe and Lunesdale David Morris MP’s bizarre and preposterous claims that they are a fictitious campaign and have called on the MP to meet with them to prove the group is genuine.

The last time the campaign group invited the MP, who is defending a majority of 866 in the next General Election to attend a meeting, he refused.

Jean Taylor of No Health sell-Off Morecambe Bay said: “Given that David Morris has such a slim majority you would think he would want to engage with his constituents rather than pretend they are make believe.  David Morris should be talking to us about the sell-off of key NHS services but instead he has resorted to bizarre measures.

"We know that people from across the area are really worried about the impact of the government’s privatisation agenda on the NHS, with over 9000 residents signing a petition against the privatisation of the pharmacies at Morecambe Bay.


"David Morris is ignoring us at his electoral peril and playing silly games in tabloid newspapers when he should be representing his constituents and passing our concerns about the NHS to David Cameron.

"David Morris claims the Transatlantic Trade Partnership will not affect the NHS in any way shape or form but today Lord Livingston, a government Minister in David Morris’s own party, admitted that the NHS is part of this trade deal. This MP is clearly out-of-touch."

Perhaps the group shouldn't be too hard on Mr Morris. After all, he's clearly a very busy man if his latest 'newsletter' to constituents is anything to go by in which he claims he has pretty much achieved everything he set out to do at the last election.

"The way it's written you'd think he was building a local link road himself without the help of anyone," said a disgruntled recipient of the leaflet, who admits to being a little confused at Morecambe's change of name on the leaflet's front page, and other typographical errors in the publication which noted the saving of Hornby School but failed to mention the closure of Skerton High.

It seems Mr Morris might be able to leap tall buildings and cut hair, but he's too busy to do some basic proof reading, let alone talk to his constituents. 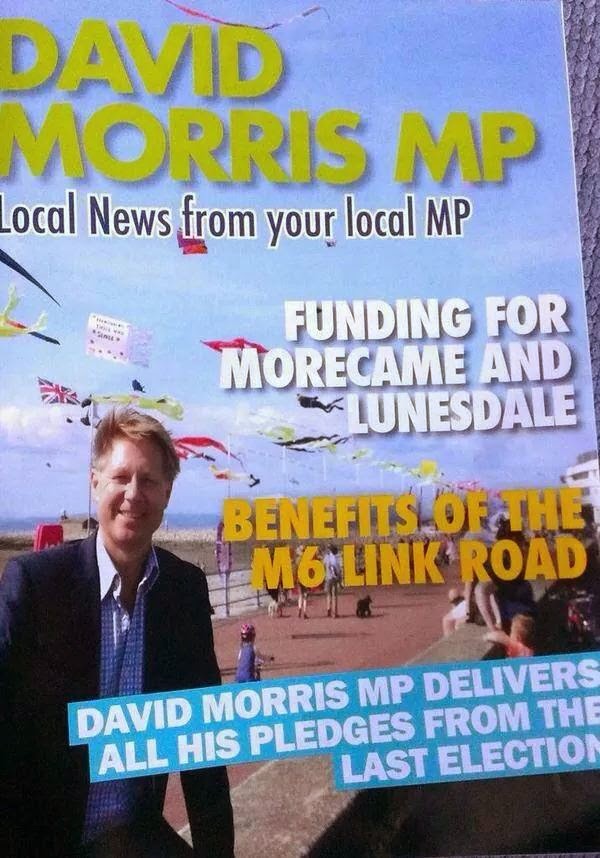 No Health Sell off is a local 'ground up' conglomeration of concerned individuals, single health issue support groups pensioners, campaigners and it crosses political bounderies and allegencies. The future of the NHS is the one cohesive issue